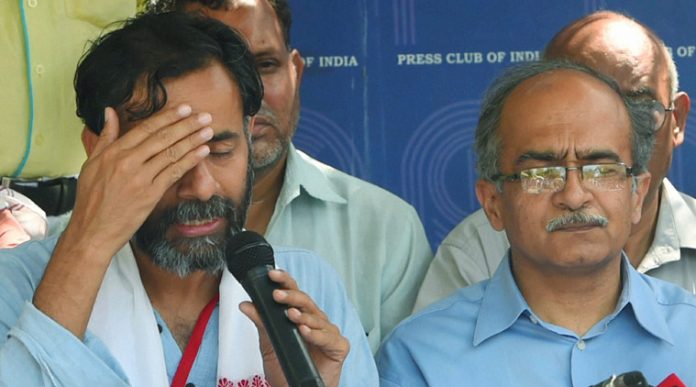 New Delhi, April 20 (IANS) Dissident AAP leaders Prashant Bhushan and Yogendra Yadav on Monday replied to the party’s show-cause notice for holding an “anti-party” meet, describing it as a “pre-scripted drama where the outcome is already decided and well-known”.

“I received your ‘Show Cause Notice’ around midnight on April 17. Frankly, I have been in a dilemma on whether to respond to this communication. On the one hand it appears part of a pre-scripted drama where the outcome is already decided and well-known,” Yadav said in his lengthy reply, indicating that he would be ousted from the party.

He cited various instances – like selection of candidates for the 2015 assembly elections in Delhi – where the party violated its constitution.

Replying to the show-cause notice for holding “anti-party” meeting in Gurgaon last week, Bhushan reiterated that the AAP’s actions were reminiscent of Stalinist purges, where in the early years after the Soviet Revolution Stalin’s acolytes were both the accusers and judges of the dissidents both in the party and the government.

He charged Khetan with writing a planted story in a national magazine defending a telecom company, allegedly involved in 2G spectrum scam.

“You (Gupta) know that there have been serious charges against you, including the acceptance of donation of Rs.2 crore from shell companies, without taking the approval of the PAC as required by the party’s rule,” Bhushan said in his reply addressed to Gupta.

“Khetan, a member of the disciplinary committee, has been accused of writing (as a journalist) a planted story in a national magazine in defence of the Essar company, which was charge sheeted by CBI in the 2G case,” he said.

The AAP was quick to reject the charges as “baseless”.

“These allegations are baseless. The rebels have disrespected the Political Affairs Committee and the National Executive of the party. Disciplinary Committee will take any action against the rebels. They were asked to reply to the party but they are answering to the media,” AAP spokesperson Ashutosh said.

In his four-page reply, Bhushan lamented that while these matters should have been referred to AAP Lokpal Admiral Ramdas, he himself was removed from the post.

The party recently issued a show-cause notice to Bhushan and Yadav for holding an anti-party meeting in Gurgaon last week. They were expelled from the AAP’s key decision–making bodies for “sabotaging the party”.

Bhushan said: “Expressing a different opinion cannot be treated as a violation of the code of conduct.”

“Mere expression of a difference of opinion should not be considered as violation of the code of conduct unless it violates the objectives of the party. You now want to become judges of your own cause,” he said.