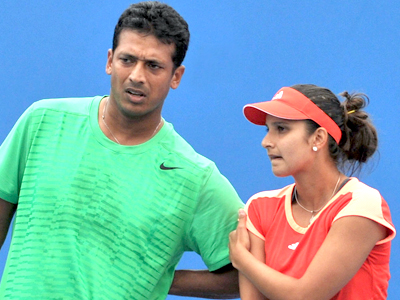 Kolkata, Oct 27 (IANS) Indian stars Mahesh Bhupathi and Sania Mirza will team up against compatriot Leander Paes and his partner Martina Navratilova in the Tennis Masters 2015, an exhibition mixed doubles contest to be held at the Netaji Indoor Stadium here on November 25.
It was however, Martina Hingis who was originally supposed to partner Paes at the event. But the 35-year-old Swiss legend would not be able to come owing to her commitments in the Champions Tennis League.
“Martina (Hingis) was supposed to come, but then she has already signed a contract with the Champions League. She wanted to play. She really wanted to come to Kolkata because last time she was with us for the Sunfeast Open. We were negotiating with her but Mr. (Vijay) Amritraj said no,” former Davis Cup captain Jaidip Mukerjea told mediapersons here.
“On the other hand, we are lucky to have Martina Navratilova. Leander told me about how good she is still now and that he was keen to play with her. She is a legend, what more can I say.
“So it will be Martina and Leander taking on Sania and Mahesh,” he said.
The 59-year-old Navratilova had won a total of 49 Grand Slam titles in her prime, including 18 singles titles and 31 women’s doubles crowns.
The match has been organised by the Jaidip Mukerjea Tennis Academy in association with the state government. After Kolkata, the Tennis Masters caravan will move to Hyderabad and Delhi.
The turf on which the game will be staged will be flown in from Dubai and to have a smooth surface it will be laid on plywood here at the Netaji Indoor Stadium.
The tickets for the contest have been priced at rupees 250, 750, 1500, 2000, 3000 and 5000. The prize money has not been decided yet.
The game will be a prelude to the second edition of the Indian Premier Tennis League (IPTL) slated to start in Japan on December 2.
“This is the start of something very big. And I hope we will be able to get the IPTL to Kolkata next year,” tournament director Sharmin Mukherjea said.
Prior to the match, there will be a pro-celebrity game, which may feature the likes of Shoojit Sarkar — the director of the Bollywood film ‘Piku’. Former India cricket captain Sourav Ganguly and actor Prasenjit Chatterjee have also been approached . There will also be a clinic for budding talents.