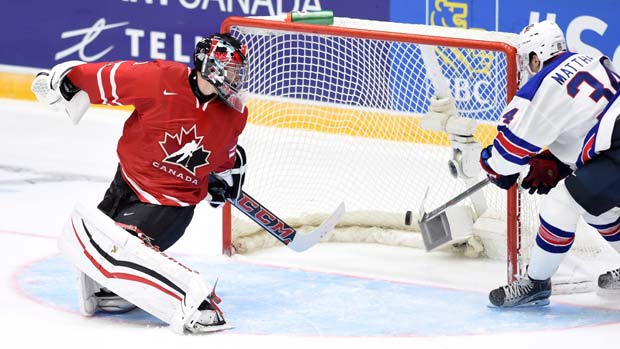 HELSINKI: Louis Belpedio and Auston Matthews scored in a 41-second span late in the third period to give the United States a 4-2 victory over Canada 4-2 on Saturday in their first round-robin game in the world junior hockey championship.

Belpedio, a defenceman from Miami of Ohio, broke a tie with 3:18 left. Matthews completed the scoring with 2:37 to go. He plays for ZSC Lions Zurich in Switzerland.

“Getting Canada right off the bat, we needed to be ready,” Matthews said. “I think everybody played well. We were up for the challenge. It was a good win for us.”

“It felt especially good because I haven’t won a game in four years,” said U.S. coach Ron Wilson, a two-time Olympic coach who was fired by the Toronto Maple Leafs in 2012. “So what better way to get back on the horse? Beating Canada meant a lot to me.”

“It was a tough game,” Canadian forward Jake Virtanen said. “They played strong and finished their plays when they got their chances.”

In the other Group A game, Dmytro Timashov had two goals and an assist in Sweden’s 8-3 victory over Switzerland 8-3.

In Group B, Russia edged the Czech Republic 2-1 in a shootout, and Finland routed Belarus 6-0. Maxim Lazarev had the lone shootout goal in Russia’s victory. Jesse Puljujarvi had two goals and an assist for Finland.

Neem – the tree of the 21st century