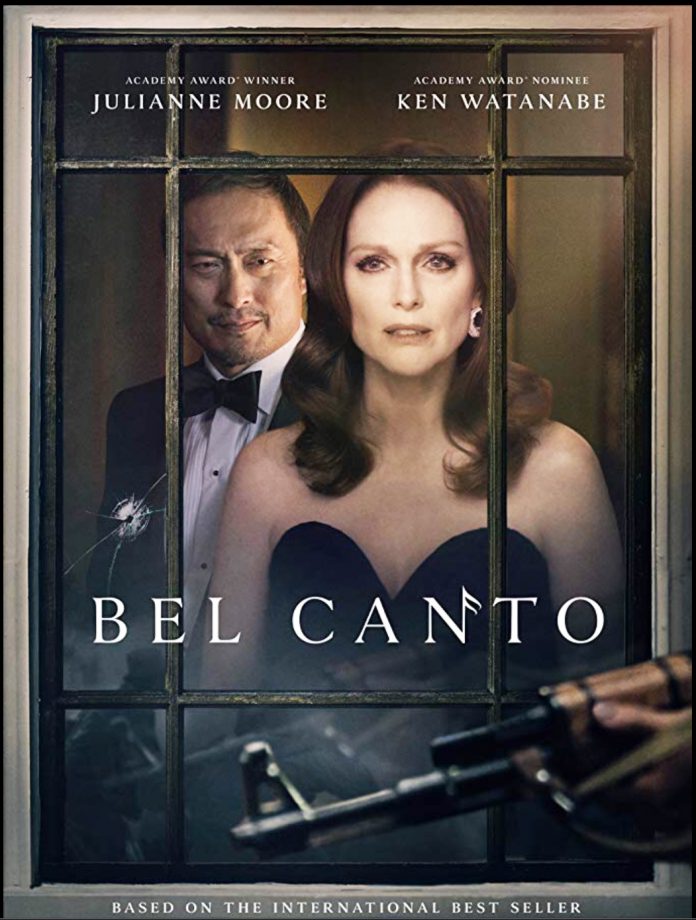 Sing for your supper takes on a whole new meaning in Bel Canto. Brought to the screen by heralded Director Paul Weitz this smartly made drama is diverting from start to finish. Share the joy and turmoil of a tumultuous evening at the Van City Theatre thanks to Red Eye Media. What’s even more surprising is the story is based on a real event that caught Peruvian authorities by surprise in the early 1980s.

With a dazzling international cast Bel Canto takes us on an unwieldy journey. Things start off pleasant enough when an opera loving industrialist makes plans to build a factory in a Latin American country. Man of all seasons Ken Watanable plays cultured Japanese industrialist Katsumi Hosakawa who has a fascination with opera singing sensation Roxana Coss. Seasoned veteran Julianne Moore (Boogie Nights) radiates on stage when this American performer is asked to sing at a lavish party hosted by the country’s president. Never mind that the region is rife with poverty.

News of the elegant gala taking place at a lavish Ambassador style home is the talk of the town. Given the divide between rich and poor in the country you can feel the tension in the air as there is lots of pleasure with the ruling junta. During that special night of glamour it’s not totally unexpected that a few gate crashers may want to send their own peculiar message.

Willing to thumb their noses at the authorities a band of modern revolutionaries descend on the palatial manner in an effort to extract demands from the leaders. Here we see the slow-building tension unfold as the government tries to deal with an explosive situation. Director Weitz pulls off a magical tense thriller with music being the conduit as a safety valve to calm things down and move things forward. Not since the classic Godfather 2 has there been such a state of siege with some mild Commando heroics added for good measure.

Instead of being an action thriller a la Arnold or Sly Bel Canto hits all the right notes as strange alliances are developed between the hostages and the captors that bodes well for a potential resolution of a very turbulent situation.

Mostly in English with sleight phrases of Japanese and Spanish Bel Canto boas5s a wonderful cast, engaging singing and a story line that is fresh and original. It’s a must see for opera fans and followers of high stakes believable drama.