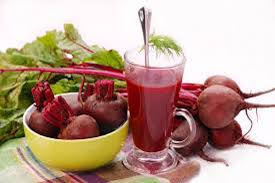 “It is a small study, but we see robust changes in muscle power about two hours after patients drink the beet juice,” said study senior author Linda Peterson, associate professor of medicine at Washington University School of Medicine in St. Louis.

The researchers believe that high nitrate content in beet juice could explain the improved muscle power in the study participants.

The nitrates in beet juice, spinach and other leafy green vegetables such as arugula and celery are processed by the body into nitric oxide, which is known to relax blood vessels and have other beneficial effects on metabolism.

Patients in the study served as their own controls, with each receiving the beet juice treatment and an identical beet juice placebo that had only the nitrate content removed.

There was a one- to two-week period between trial sessions to be sure any effects of the first treatment did not carry over to the second.

Two hours after drinking the beet juice with high nitrate content, patients demonstrated a 13 percent increase in power in muscles that extend the knee.

The researchers observed the most substantial benefit when the muscles moved at the highest velocities.

The increase in muscle performance was significant in quick, power-based actions, but researchers saw no improvements in performance during longer tests that measure muscle fatigue.

The researchers also pointed out that participants experienced no major side effects from the beet juice, including no increase in heart rates or drops in blood pressure, which is important in patients with heart failure.

The study appeared in the journal Circulation: Heart Failure.