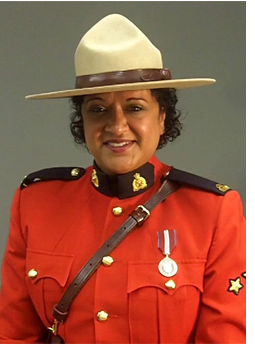 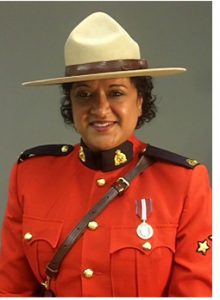 Nav Hothi recently became BC’s first South Asian female Commissioned Officer, as an Inspector. Nav is a Regional Duty Officer for the Lower Mainland District, where she monitors all RCMP operations in the Lower Mainland. She is also responsible for coordinating any major cross-jurisdictional incidents working with RCMP teams and other emergency response agencies.

Growing up, Nav wasn’t sure of where her career aspirations would lead her. She applied to the RCMP after meeting with a career counsellor. Her skills and personality tests showed she had strong aptitude for law enforcement. Shortly after meeting with her career counsellor, Nav attended an RCMP recruiting session and started her application. Her career has taken her all around the world, starting in Surrey, taking her to Thailand and Italy and now back again to the Lower Mainland.

After completing her basic training at Depot, the RCMP Academy in Regina, SK, Nav was posted to Surrey Detachment. She says I knew from my first day in Surrey this was the career for me. Coming from a South Asian background provided her with a distinct advantage serving a large immigrant community. She was able to use her Canadian values combined with her Indian heritage to engage and build relationships in the community. This also allowed her to break down some of the stereotypes and misconceptions citizens had about dealing with police.

Nav’s parents were both originally from Punjab, India and had been living in the UK when she was born. They moved to Canada when she was just a baby. Being raised in an Indian family, Nav and her three sisters were encouraged to be independent; to carve their own path. Her family didn’t bat an eye at her decision to become a member of the RCMP.

Nav worked as a Forensic Identification Specialist for ten years. She specialized in crime scene analysis, evidence search, recovery and examination. She was one of ten RCMP specialists who travelled to Thailand in response to the Boxing Day Tsunamis of 2004. She worked as a part of the Canadian disaster victim identification team, which allowed victims to be identified and returned to their loved ones and home countries.

One of the highlights of her career to date has been performing Red Serge duties during the Turino 2006 Winter Olympics. Nav spent several days working in the BC Pavilion, talking to visitors and taking pictures wearing her Red Serge. Nav was thrilled to have the opportunity to carry and raise the Canadian flag during the closing ceremony of the games.

As she settles into her new role as a Regional Duty Officer, Nav looks forward to the new opportunities where she will get to work with the many diverse communities in the region. Helping the community has been so fulfilling says Nav, I believe in public service, this was meant to be the career for me.