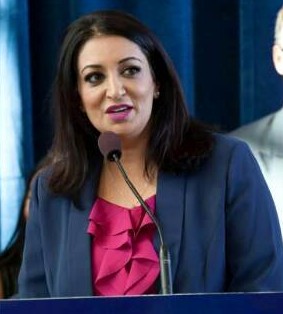 Surrey: Surrey city councillor Barinder Rasode announced her bid to run for Mayor of Surrey. Rasode launched her campaign in front of a large crowd at Surrey SFU Grand Hall, accompanied by her three children Kyle, Calvin and Ish.

Rasode said that if she is elected, she will make public safety a top priority in Surrey. She launched her campaign with a slogan “One Tough Mother”. She announced that she will double the number of officers on patrol, and hire more community safety personnel such as by-law officers.

“This election is a choice: a choice of whether we build a safe and prosperous city or whether we continue to do things the same old way,” said Rasode.

Rasode termed the event a huge success and thanked Bob Campbell who helped her to kick off the campaign with his motivational opening remarks.

One of the things Barinder has taken as a personal responsibility, as a woman who’s elected to office, is to raise a voice on the issue of domestic abuse.

Maz Artang energized the crowd with his uplifting and motivational words. Following Maz, former Senator Gerry St. Germain spoke few words of wisdom for Barinder, before introducing her to a standing ovation from the crowd. Walking through the crowd with her children, Barinder made her way to the stage and addressed the packed house, expressing honour at the reception and outlining her plans to move Surrey forward as a safe and prosperous city.