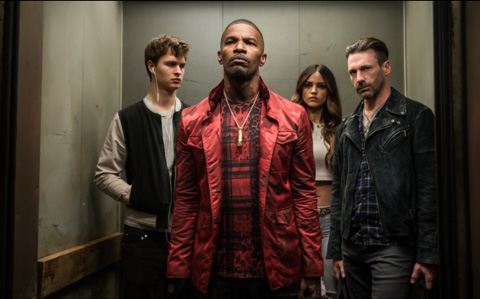 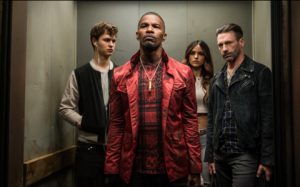 People who say little can have a certain appeal. Think Clint Eastwood’s famous portrayal of the man with no name from those three classic Sergio. Leonne 1960s spaghetti westerns that made Clint a star. That same fate will befall the lead in Baby Driver. Bet big on it. From of nowhere this extremely clever dramatic action driven drama from Sony Pictures simply captures the imagination and never lets up. Speed on down to your nearest Cineplex Theatre to get in on the fun. On second thought if you drive carefully as this film will be here for a long. Long time.

Often it helps if you have a working knowledge of film to craft something than will appeal to both the masses and the intellectual elite. Think Quentin Tarantino and you’re halfway there. Without question Edgar Wright simply got it right as Baby Driver excels. Far from being just your standard crime/heist film Wright executes and has written a wonderful tale of a youthful driver for the mob whose inexperience at life manages to get in the way of his work that clearly rubs well-meaning boss Kevin Spacey the wrong way.

Apart from the typical car chases and action which are anything but typical here casting means everything. My, oh my up did the filmmakers luck out when they gave the role of Baby to Ansel Elgort. Put simply this lad must have been the model for the Eveready Energizer Rabbit as he just bounces around like a Mexican jumping bean. All that temporarily slows him down just a tad is a would-be romance with Lily James whose innocence and inexperience perfectly matches Baby.

There are so many strong points this movie it’s had to remember them all. Anchored by car chases that make The Fast and Furious looking stalls in park think along the lines of classics like Bullet, The French Connection and the more recent Rodin and you get the picture. And having quality actors like Jamie Foxx and of all people John Hamm taking a turn to the dark side only heightens the appeal to this non-stop thrill ride.

Lest I forget the music that helps calm Baby’s Nerves throughout perfectly captures the mood of this movie whose brilliant execution and delivery delivers s truly unique and special movie experience. Put simply Baby Driver is sensational on all counts.