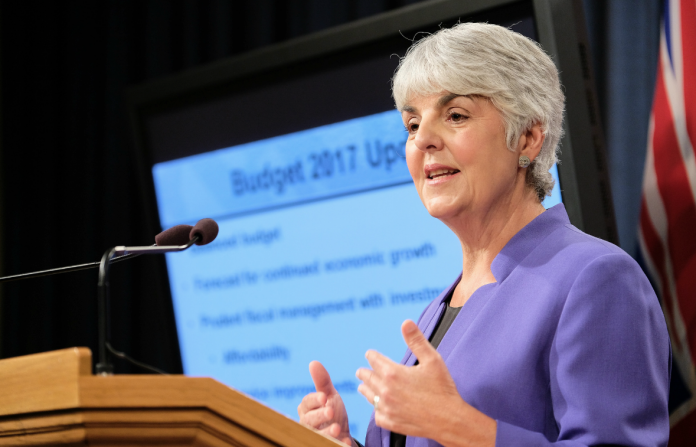 Victoria: British Columbia’s financial outlook is being hammered by the COVID-19 pandemic, but a partial recovery is on the horizon next year, says Finance Minister Carole James.
But James, who described herself as a realist Thursday, said B.C. remains a long way from rebuilding its economy to pre-COVID-19 levels.
The province’s most recent financial numbers from April to June project an economic decline of 6.7 per cent this year, while the budget is forecast to post a deficit of almost $13 billion for the 2020-21 fiscal year, she said.
James said the COVID-19 pandemic has challenged and changed the province.
“Just as we’re seeing globally and in Canada, B.C.’s economy and everyday lives of people and the businesses of our province have been seriously impacted,’’ she said at a news conference.
“The impact of COVID-19 has touched on almost every area, as you can imagine personal and business incomes, retail sales, purchases of fuel, the housing market, all of those have dropped compared to predictions in the budget in 2020.’’
Last month, James said B.C.’s final 2019-20 budget changed from a projected modest surplus to a deficit of $321 million in a matter of weeks with the arrival of COVID-19. She said B.C. is now expected to battle budget deficits for the next year and likely longer.
James said Thursday that revenue forecasts are $4.6 billion lower and expenses are $7.7 billion higher, largely due to the province’s pandemic response.
Jas Johal, Opposition Liberal economic development critic, said the government has been too slow in responding to the economic devastation of the pandemic.