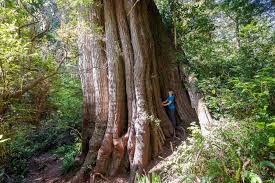 Hazelton: The British Columbia government says the protection of the province’s old-growth forests requires a united effort of groups, industries and people who have often disagreed over land-use issues.

Forests Minister Doug Donaldson said Friday the government wants to break from the past  when forestry decisions led to confrontations and fully involve environmental groups, Indigenous leaders, forest companies, labour organizations and communities while working together to protect forests and support jobs.

The recommendations of an independent panel report called “A New Future for Old Forests” could serve as the “springboard” to a new and more all-encompassing approach to protecting the province’s old-growth forests, he said.

“Addressing the issue of managing old-growth forests while supporting workers and communities has been a challenge in the making for more than 30 years and it won’t be solved immediately, but we know that the status quo is not sustainable,” Donaldson said at a news conference.

B.C. must do a better job of finding ways to protect old-growth forests while saving jobs, he said.

“I do believe that there is enough goodwill on everyone’s part for this to happen, and that’s to use this report as a springboard, as an opportunity to reduce the polarization on this topic,” Donaldson said.

Among the old-growth logging areas affected are: Clayoquot Sound on Vancouver Island, Crystalline Creek near Golden and the Seven Sisters area in northwest B.C.

The ministry says about 137,000 square kilometres or 23 per cent of B.C. forest lands are old-growth forests.

Jens Wieting, the Sierra Club’s B.C. forests campaigner, said in a statement: “While we welcome these first steps, what’s missing from today’s announcement is a commitment to implement all of the report’s recommendations with full funding.”

In July 2019, B.C. announced a panel to conduct an independent strategic review of old-growth forests.

Professional foresters Garry Merkel and Al Gorley submitted 14 recommendations to the government, including a call for a three-year old-growth strategy and involvement of Indigenous leaders, environmental groups, community-based organizations, local governments and the forests industry in discussions about the future of old-growth forests.

“The recommendations provided in our strategic review and summary report were shaped by a recognition that society is undergoing a paradigm shift in its relationship with the environment, and the way we manage our old forests needs to adapt,” said the report.