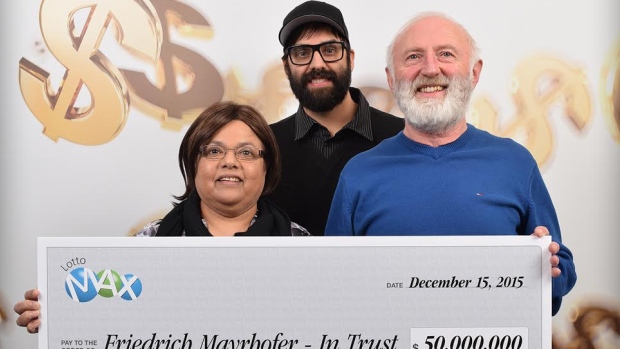 VANCOUVER: It’s been a $50-million dollar question across Canada for the last 21 months: who owns the lone winning ticket from the March 14, 2014 Lotto Max draw.

Friedrich Mayrhofer, who described his family as shy and private, stepped forward to make the claim in Vancouver on behalf of himself, his wife, Annand, and their son, Eric.

A lawyer for the family made the lottery claim earlier this year, just days before the ticket was to expire, on behalf of a trust, but the B.C. Lottery Corp. ruled that only an individual can claim the prize.

Mayrhofer says they tried to remain anonymous out of concern that they wouldn’t be able to handle such an enormous prize, but now they’ve set up a group of advisers to help them handle the money.

In hindsight, Mayrhofer says he wishes he would have come in earlier because it was much easier than he thought and the family lost about $500,000 in interest.

Mayrhofer says the family plans to do some renovations on their home in Langley, B.C., and his wife wants to buy some new furniture _ a cost that he joked he “hoped” to afford.

World Sikh Oraganization selects new board and president for 2020-21