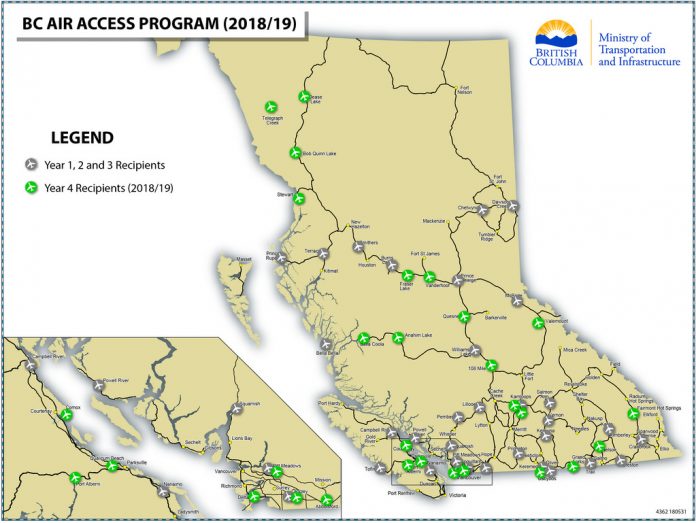 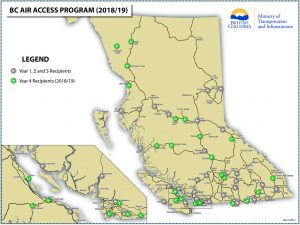 Abbotsford: The British Columbia government is giving grants to 23 regional airports through the B.C. Air Access Program (BCAAP) to make safety and capacity upgrades, and create a better experience for people travelling by air.

“Airports are a vital transportation link across the province and a lifeline for the many smaller communities they serve,” said Claire Trevena, Minister of Transportation and Infrastructure. “These grants make sure airports have the support they need to make important upgrades that would otherwise be too costly.”

Past recipients, like Chetwynd Airport, have seen major improvements thanks to the support. The airport was awarded $1.3 million last year to repave its runway – a safety upgrade that was required to fix cracking pavement and halt the risk of closure.

“Funding from the B.C. Air Access Program made it possible for us to complete crucial safety upgrades at Chetwynd Airport,” said Carol Newsom, chief administrative officer with the District of Chetwynd. “There was a critical need to resurface this runway, so planes and emergency air craft could continue to land safely and our airport could remain open. We’re grateful for the long-term impact this will have on our facility and community.”

Projects can range from minor upgrades, like Bob Quinn Lake Airport’s runway vegetation management, to major advancements, like Qualicum Beach Airport’s terminal expansion. All B.C. aviation facilities can apply for funding each winter, to be awarded the following fiscal year.

“Our airports are critical for B.C. – they are the socio-economic drivers for the communities they serve, and the B.C. Air Access Program offers vital support to these heavily used facilities,” said Heather Bell, chair of the British Columbia Aviation Council. “We’re thrilled that, once again, the Province is providing this welcome funding relief that makes it possible for B.C. airports to upgrade their facilities with important improvements that will benefit the communities, staff and travellers who use them.”