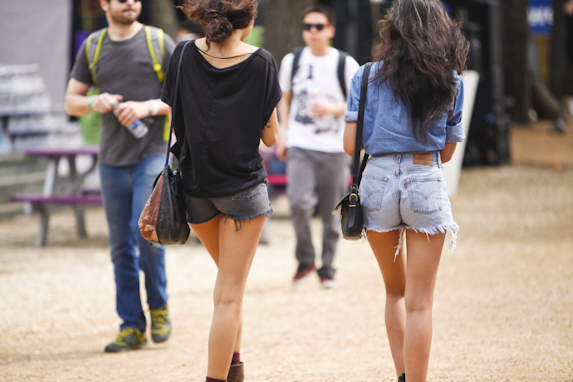 New Delhi/Guwahati, Aug 25 (IANS) A news clip aired by an Assamese news channel, which went viral on social media, has equated young girls wearing shorts to monkeys, giving rise to a heated debate in civil society in the northeastern state with some saying “nowadays we are more scared of the media than the police”.

Assam boasts of traditionally empowering women, but the video aired by Pratidin Time opened with a shot of a monkey dressed in pants with a voice in the background saying in Assamese: “Monkeys have also started wearing clothes and know how to wash clothes, but girls in Guwahati now prefer wearing shorts for comfort. Maybe for them fashion means exposing, resulting in their attire which is shorter than needed.”

The video has a number of clips of girls walking around the city in short dresses or wearing t-shirts and shorts.

Civil society members have protested against the channel and a peaceful march was organised in Guwahati on Sunday. But the inexplicably police arrested several of the protestors, booking them for “violating curfew” when no announcement of curfew was made.

“Privacy is being violated. Nowadays, we are more scared of the media than the police because you never know when and where mediapersons will catch us and shame us, in the name of news, Minakshi Bujarbaruah, researcher and gender rights activist, told IANS over the phone from Guwahati, where she was also arrested earlier for taking part in the protest march.

“We are responsible for what was aired, but the packaging and some of the content (referring to the part about monkeys) were wrong. Warning has been given to the reporter regarding the matter not to repeat anything similar in future,” Saikia told IANS.

However, he indirectly appeared to justify the objection to short dresses. “Will you go to a wedding to “naamghar” (traditional Assamese prayer hall) wearing a pair of shorts? No. Some things will never be a part of or be welcomed into Assamese society,” Saikia asserted.

He said Assamese society still needed to open up to a lot of things, especially when it came to issues like the length or shortness of clothes.

Saikia said that what the reporter “wanted to convey was not intended to hurt anyone. It was to only show people what is going on in the city these days.”

The channel also carried the views of a man who said: “The culture of Assam is not the same any more. After wearing such things, they (women) have the audacity to shout at men who letch.”

But is wearing shorts or showing a bit of skin a problem in Assam?

According to Abhinav Borbora, Guwahati president of the NGO College Students Welfare, what is worrisome is not the short dress but the fear that Western influences can lead to an “untimely death of culture and traditions.”

Borbora, who is also organising an event on the issue in Guwahati, said that according to some people, Western clothes means exposure and Indian attire means tradition. “My point here is that a woman can expose a lot more wearing a saree and a blouse rather than a pair of shorts and a t-shirt,” he added.

Bujarbaruah says it was “very unfortunate that the media whom we call the pillars of democracy is hell bent on moral policing.”

She said they were planning on a mass protest next week to sensitise people towards women. “It will help create a movement of like-minded people on a larger scale,” she added.

According to observors, the kind of TV report carried by the channel brands people into stereotypes — one a girl who a man feels proud to introduce to his parents, or another who goes to discos, wears short clothes, drinks and smokes and is therefore labelled as “devoid of Assamese culture”.

“Gender equality is something that the media should work on more. The media should really break women-centric stereotypes and there should be a sincere effort for gender balancing. Responsible journalists should take this as an opportunity to educate people,” said senior journalist and TV talk show host Wasbir Hussain over the phone.

Modi’s three-nation tour to focus on Make in India, defence