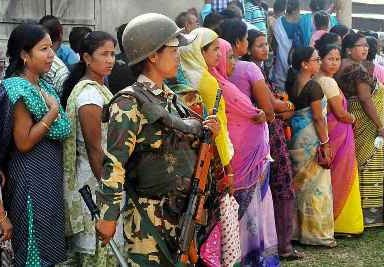 Guwahati, April 11 (IANS) The second and final phase of polling to the Assam assembly in 61 constituencies on Monday saw 82.02 percent of the over one crore voters casting their ballot, on a day that witnessed the death of a voter in a clash with security forces and injuries to many others in different places.

Polling officials estimate that the final poll percentage is likely to touch 85 percent as reports were still coming in from polling centres.

Balloting, which started at 7 a.m., saw incidents of violence in some areas.

Chief Electoral Officer Vijayendran said 82.02 percent polling has been recorded so far but the percentage was likely to increase further to 85 percent.

He said a total of 191 Electronic Voting Machines (EVMs) were replaced in different polling stations due to their malfunctioning.

One person died following a baton charge by Central Reserve Police Force (CRPF) personnel after a scuffle took place between a group of people and security forces at a polling station in Barpeta Road. Three other people were injured in the incident.

In another incident, security personnel deployed at a polling station at Nagarbera had to open fire in the air to control a crowd. No one was, however, injured in the incident.

Election officials said similar incidents were reported from some other areas as well.

Vijayendran said polling across the 61 constituencies was by and large peaceful.

His wife Gurcharan Kaur, also a voter in Dispur constituency, however, did not come to vote.

“I think the people of Assam will reward the Congress party for the good work it has done for the people in the last 15 years,” Manmohan Singh told the waiting media persons.

Asked about the Bharatiya Janata Party’s allegation that he had not done anything for Assam when he was the prime minister, he said: “I do not want to counter what the prime minister (Prime Minister Narendra Modi) has said about me. But he (Modi) also knows that what he has said is not true.”

Tight security measures were put in place at the school since Monday morning.

Security forces, including personnel from the Central Reserve Police Force and Special Protection Group, allowed voters to enter the polling centre only after frisking.

Long queues were seen before the polling stations since around 6 a.m.

There were 525 candidates in the fray — 48 of them women. Voting took place in 12,699 polling stations across the state.

The first phase of polling for 65 constituencies took place on April 4 which remained peaceful and recorded 83.20 percent turnout.