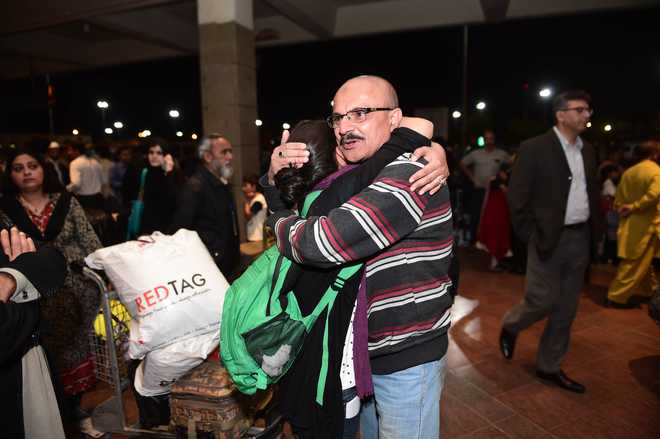 Islamabad, March 30 (IANS) Around 500 Pakistanis stranded in the conflict-ridden Yemen arrived home on board a Pakistan International Airlines (PIA) plane on Sunday night, according to media reports.

Families of the passengers on board the PIA special flight reached the Jinnah International Airport in Karachi to receive their loved ones, reported Geo News.

The flight landed at around 11.30 p.m. and will transport several passengers to Islamabad early on Monday morning where Minister for Information and Broadcasting, Pervaiz Rashid, will welcome them.

Pakistan Prime Minister Nawaz Sharif ordered more flights to be sent to Yemen for bringing the rest of the stranded Pakistani nationals home in the next 48 hours.

Sharif on Friday ordered the Pakistani mission in Yemen to take steps for the immediate evacuation of stranded Pakistani families in the troubled country.

Earlier on Sunday, the PIA special plane departed from the city of Al-Hudaydah in Yemen. There was no electricity at the airport in Al-Hudaydah and neither any working machinery, and hence all paper work was done manually, reports said.

Pakistan foreign office spokesperson Tasneem Aslam said on Sunday that 150-200 Pakistanis were stranded in the city of Aden in Yemen.

However, she added that with the airport in Aden being inaccessible owing to the conflict, the trapped Pakistani nationals would have to travel by road from Aden to the city of Al-Mukalla, where an airplane will reach on Tuesday to bring them back to Pakistan.

Aslam said that a Pakistani naval ship was also on its way to Aden.

She added that the Pakistan foreign office was trying to contact Chinese officials in Yemen to help in the evacuation of the Pakistani nationals.

General Motors Canada to cut assembly workforce by 1,000 jobs in...