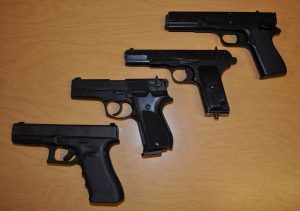 Vancouver: Think you can tell the difference between a real and fake gun? Are you able to determine whether a gun is real or not in this photograph? There are situations where police officers need to make this judgement call within a matter of seconds. The real handgun is the one on the bottom – the others are air replica BB or air pellet guns.

Recently, the North Vancouver RCMP had to make this judgement call when officers attended a domestic situation. They noticed a handgun that was in plain sight on the couch beside an individual. At first appearance, officers perceived the gun to be real and responded with appropriate tactics. As it turned out, the gun was a replica soft air pistol (the second gun from the bottom) with no one being harmed.

Police want to caution youth about the dangers of playing with imitation guns in public places like neighbourhoods, parks and malls.

Police take firearms complaints very seriously due to the threat they are to public and officer safety, and will respond with appropriate resources, tactics and level of force, said Cpl. Richard De Jong of the North Vancouver RCMP.