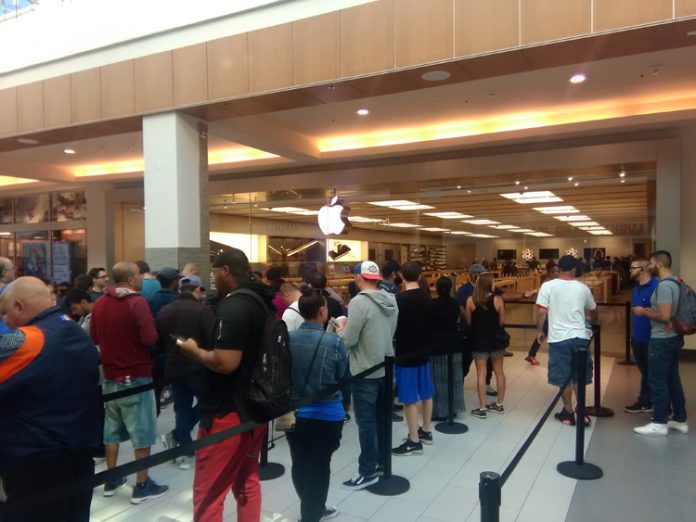 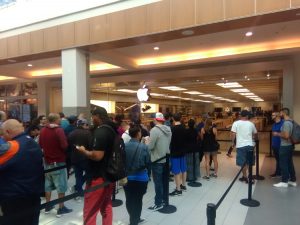 Long Island (New York): Apple enthusiasts are known to swarm company stores and form long queues in the hours before any big launch and the scene at retail stores across the US with the availability of stunning iPhone 7 and Apple Watch Series 2 was no different on Friday.

At the stroke of 8 a.m. amid clapping from Apple employees and cheers from iPhone 7 wannabes on a sunny morning, the craze to catch hold of a handset was visible from the word go.

To get an iPhone 7, one had to register first and then, be part of the growing queue.

The scene at Apple Store in Roosevelt Field, Garden City in Long Island was similar to the flagship ones at Fifth Avenue near Times Square, Apple Grand Central and Apple SoHo which were swamped by long queues.

“I am here to buy iPhone 7 128GB variant for my wife. And what better than a rose gold colour to gift your wife,” Indian-American Surinder Singh told IANS as he waited patiently for his turn at the Garden City Apple Store.

“Although I am a Samsung lover, my wife is a die-hard Apple lover so it makes sense to buy iPhone 7 for her on the first day of its launch,” Singh added.

The iPhone 7 was launched in 28 countries on Friday — the biggest launch of an Apple device yet.

“We are very excited. The atmosphere is amazing and the response is huge,” said Andrews who works at Apple Store at Garden City.

iPhone 7 features breakthrough new camera systems, the best battery life ever in an iPhone and water and dust resistance.

Starting at $369, the ‘Apple Watch Series 2’ will be water resistant to 50 metres and the speaker will literally repel the water like a piston.

The device will have a dual core processor with GPU that is up to two times faster.

According to industry analysts, since Navratri — an auspicious time for shopping — begins on October 1 and with Diwali falling on October 30, this is a strategic time for Apple to register super iPhone 7 sales in India.

Apple CEO Tim Cook recently announced to soon open retail stores in the country — a move that brings to the fore the global importance of the burgeoning Indian smartphone market.

The sales of the Apple devices in India rose 51 per cent in the last three quarters compared with a year earlier, Cook said.

“India is now one of our fastest growing markets. In the first three quarters of this fiscal year, our iPhone sales in India were up 51 percent year on year. We’re looking forward to opening retail stores in India down the road and we see huge potential for that vibrant country,” Cook added.

(Nishant Arora can be contacted at nishant.a@ians.in)