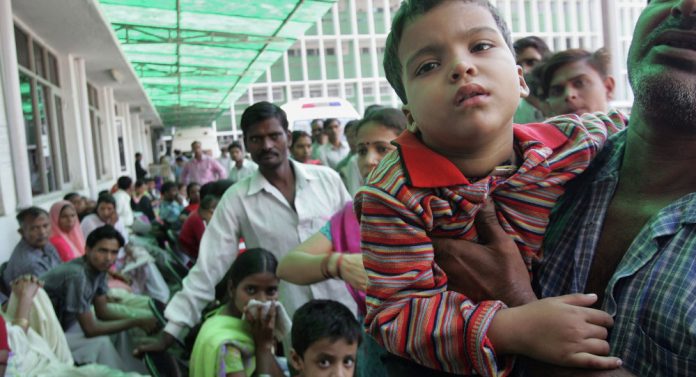 New Delhi, Sep 15 (IANS) The death of a child due to dengue allegedly because of apathy of hospitals — the second such case in a week — led Chief Minister Arvind Kejriwal to conduct surprise inspections of hospitals on Tuesday and holding a meeting of his cabinet to discuss the possibility of an assembly session to frame a law to deal with “negligence” of private hospitals.

The Delhi government on Tuesday also issued instructions to schools to ensure that for the next one month students come to classes wearing clothes which fully cover them irrespective of school uniforms.

Health Minister Satyendra Jain held meetings with officials of private hospitals and told them to increase the number of beds, admit dengue patients and not turn them away.

He said government hospitals, if needed, can hold walk-in interviews to recruit more doctors and nurses to deal with the rush of patients.

A 29-year-old woman from northwest Delhi died of dengue at the Lok Nayak Jaya Prakash (LNJP) Hospital on Monday evening.

According to data released till Monday by the three civic corporations — North Delhi Municipal Corporation (North DMC), South DMC and East DMC — the number of deaths due to dengue was five and the total dengue cases reported in the city were 1,872.

The family members of six-year-old Aman, who died on Sunday, alleged on Tuesday that several hospitals declined him admission while the child was running up a fever.

“My son had fever and we took him to Safdarjung Hospital but we were told by the hospital that the boy was doing fine and that there was no problem,” Aman’s father Manoj Sharma told IANS.

He said when Aman’s condition deteriorated that night, he was taken to Jeevan Nursing Home but the family was told to take him to a bigger hospital as his condition was bad.

Sharma said the boy was then taken to Moolchand but the parents were told that no beds were available.

Sharma said he also made inquiries over telephone at Max and Batra hospitals but was given the same reason about beds not being available.

Aman was then taken to Safdarjung Hospital and later to the Holy Family Hospital where he died.

“The cause of the death, according to the hospital reports is dengue,” Sharma said.

Following his death, Avinash’s parents committed suicide by jumping from the fourth floor of the building they lived in.

The Delhi government on Tuesday ordered a magisterial inquiry into the alleged refusal by some private hospitals to admit Avinash.

Deputy Chief Minister Manish Sisodia instructed the divisional commissioner to depute the local sub-divisional magistrate to conduct the probe and submit a report to the Delhi government within seven days.

Kejriwal, who along with Satyendra Jain conducted surprise inspections at Guru Teg Bahadur Hospital and Dr Hedgewar Hospital, asked the doctors to treat the patients properly and not to turn them away.

“I appeal to the people of Delhi not to panic. The government is making arrangements in hospitals by adding extra beds and space,” Kejriwal told media persons.

He also assured of strict action against hospitals which turn away patients citing any excuse.

Kejriwal later held a cabinet meeting which discussed “the possibility of convening a special session of the Delhi assembly to implement the option which the government will finalise to deal with negligence of private hospitals”.

The cabinet stressed the need for ensuring accountability of private hospitals and felt an effective system of patient care should be introduced, an official release said.

Wilkinson won’t say how much your car insurance will go up...