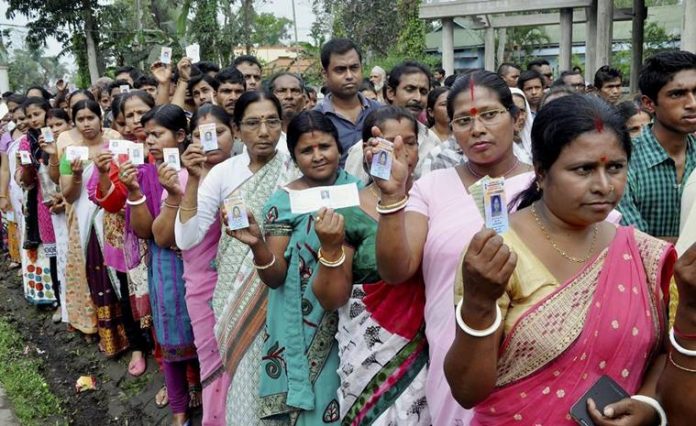 Kolkata, April 11 (IANS) Braving the sweltering heat and oppressive humidity, people turned out in huge numbers on Monday to exercise their right to franchise in the West Bengal assembly polls in 31 constituencies, amid reports of sporadic violence and intimidation.

The opposition parties accused the ruling Trinamool Congress of resorting to widespread violence during the day, when the second part of the first phase of the assembly election took place covering 13 constituencies in West Midnapore and nine each in Bankura and Burdwan districts.

According to Election Commission officials, between 75 and close to 85 percent polling was seen in the three districts till 5 p.m. However, till 8 p.m., the officials could not provide the final overall percentage.

A polling official, Parimal Barui, deputed to a booth in Pandabeshwar of Burdwan district, fell ill on Sunday night and died on Monday, the EC said.

At least 13 people were injured in a clash between political rivals at Jamuria of Burdwan district. “Three-four people have been detained,” said a police officer.

An Election Commission official said in Delhi that orders have been given for lodging an FIR against Trinamool legislator Mohammed Sohrab Ali, for entering a polling booth. The presiding officer was also removed.

Ali was not nominated by the Trinamool as a candidate this time, as he was given a two-year jail term by a court last year in a theft case.

An EC official here said no one was arrested anywhere for any poll-related offences, and there were no incidents of booth capturing.

“We have also not received complaints of any serious offences,” the official said.

But the Left Front, Congress and the Bharatiya Janata Party alleged that the polls were far from peaceful and fair.

Several crude bombs kept in a bag were seized from about 50 metres from a booth in Jamuria, while a Communist Party of India-Marxist polling agent had to be hospitalised after he was attacked at a polling booth in Chandrakona.

Tension prevailed in Bankura’s Sonamukhi where a CPI-M polling agent was attacked and masked men, armed with bamboos and cane, were seen roaming around.

Locals, said to be Trinamool Congress activists, staged angry demonstrations against CPI-M state secretary and candidate from Narayangarh constituency of West Midnapore Surjya Kanta Mishra when he visited some of the booths on receiving complaints of electoral malpractices.

Pointing fingers at the Trinamool, the Left Front said the EC failed in its responsibility to protect people’s democratic rights.

“There has been booth capturing and false voting across the constituencies. Our polling agents were assaulted, abducted and driven away, voters intimidated and our complaints regarding all that went un-redressed,” said Left Front chairman Biman Bose.

He alleged that 150 booths were captured in Keshpur constituency, 30 in Garbeta and over 20 booths in Chadrakona.

Congress candidate from Sabong in West Midnapore district Manas Bhunia alleged that Trinamool “goons” looted votes in some parts of the constituency.

In Delhi, the Congress moved the Election Commission alleging malpractices in some constituencies and sought “protective measures” from the poll panel.

Union minister and BJP leader Babul Supriyo said: “Today there have been sporadic violence, but with every phase, the Trinamool’s terror would increase. So we would urge the EC to enhance its supervisions and observation to ensure the polls are free and fair.”

The Trinamool, the Left Front-Congress combine and the BJP are locking horns in all the seats.

In the 2011 assembly polls, the Trinamool Congress had bagged 17 and its then ally Congress got three seats. The Left Front, then in power, won the remaining 11.

Voters in 18 constituencies — six in West Midnapore, nine in Purulia and three in Bankura — exercised their franchise on the first polling day on April 4.