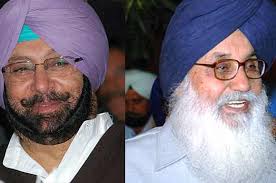 During an interactive session at the Hindustan Times Summit here, the two engaged in banter, criticised each other but also had word of admiration for each other.

Predicting the results, Amarider Singh proposed to have a bet on it.

“Akalis won’t cross 20, Aam Aadmi Party (AAP) will get little more than that and we’ll (Congress) form the government… How about a bet? I challenge that his (Badal’s) party won’t win more than 20 seats.”

“Let’s have a bet on the fact that Akali Dal won’t win another term in Punjab,” he said.

In response, the younger Badal quipped: “Will you be able to find him (Amarinder) after the results?”

Making his own prediction, he said: “AAP will win less than 10, Congress will win around 35 seats and we’ll win 70 plus.”

Badal again took a dig at Amarinder on the issue of cricketer-turned-politician Navjot Singh Sidhu joining the Congress.

“Captain Sahab has no choice, he was actually against Sidhu but he was forced on him. Every day in the newspapers, he has been cursing Navjot Singh Sidhu. The problem with Congress is if High command tells them to sit, everyone sits.”

Badal also said that Amarinder Singh knew better who to give the tickets for elections, but the Congress high command does not listen to him.

“If you look at the statetments of Sidhu, he said he wants to join Congress minus Captain (Amarinder),” he said, and asked: “Am I right?” said Badal. Amarinder replied: “Yup”.

“Maybe, the high command has promised them (the Sidhus) that Captain Sahab may not be there after elections,” Badal joked.

However, Amarinder said: “If Navjot comes, it is going to be a plus point for the party.”

On the question of Sidhu’s wife Navjot Kaur Sidhu attacking Amarinder, he replied: “We have attacked each other.. In political life, you pick up issues and attack individuals. You don’t attack them individually. You attack them on issues.”

To a question on Sukhbir touching his feet at the start of the discussion, Amarinder quipped said in a lighter vein: “We put you behind bars and yet did everything for you, even sending you Diet Cokes because you asked for them.”

Badal replied: “I respect my elders. I touched Captain’s feet even when he put me into prison.”

Both leaders took their turns to criticise Kejriwal and his Aam Aadmi Party, with Badal saying that most of its candidates AAP have criminal records, while Amarinder said Kejriwal is a “lost case in the state”.

Even as he categorically denied any nexus with the Akalis, as alleged by Kejriwal, Amarinder also ruled out as “out of question” any post-poll alliance with the AAP.

“It’s a fight between Congress and Akalis. People know them (AAP) very well now… Out of 50 candidates they have declared, 35 have criminal records,” said Badal.

In the end, on being asked about what were the qualities they admired about each other, Amarinder said: “The image he (Badal) has is that he does what he says, unlike his father. He has a reputation that he stands by what he says.”

Badal said: “We have one thing in common, we both like Diet Coke”, but added: “Among the Congress leaders, I think he (Amarinder) is the person who can keep them together.”

“He had showed that quality in the last election,” Badal added jokingly.

‘Sidhu’s new political front will have no effect on AAP’