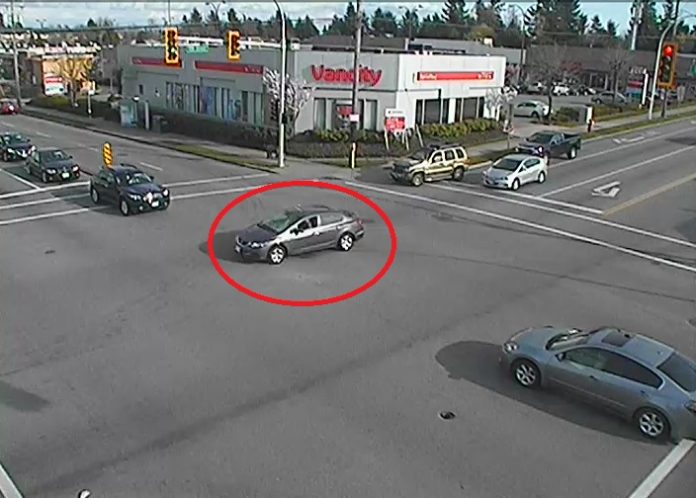 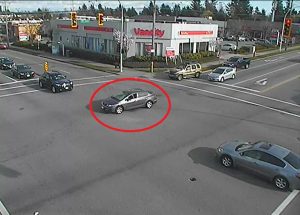 Surrey: Surrey RCMP has concluded the investigation into a 2015 hit and run investigation with charges now being sworn against a 27-year-old Aman Sanghera.

On April 6, 2015, at about 5:45pm, police were in the 12600 block of 92nd Avenue and witnessed a hit and run crash between a car and pedestrian. A silver car sped off leaving one elderly male seriously injured.

The officer attempted to stop the fleeing vehicle however it failed to stop and was last seen travelling north bound on 128th Street through the intersection at 96th Avenue.

The photo depicts the suspect vehicle fleeing the accident scene through a red light at 96th Avenue and 128th Street.

The Surrey RCMP Criminal Collision Investigation Team (CCIT) led the investigation with assistance from the Integrated Collision and Reconstruction Service (ICARS). A thorough investigation was presented to Crown Counsel who approved charges.

Aman Sanghera is now charged with Fail to stop at an accident causing bodily harm and Dangerous driving. Sanghera was arrested on November 3rd, appeared in court, and has subsequently been released pending his next court date.

“Hard work by investigators and intersection cameras helped to lead investigators to Sanghera who is alleged to have been the driver,” says Corporal Scotty Schumann.

TransLink expands SkyTrain and SeaBus service to launch Phase One of...