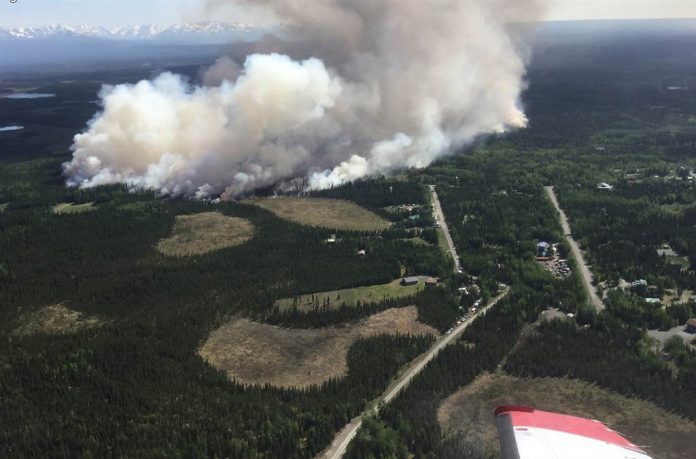 By Dan Joling, THE ASSOCIATED PRESS

ANCHORAGE, Alaska: Firefighters and equipment from the lower 48 states and Canada are arriving to help battle wildfires burning in the nation’s largest state.

Weary firefighters welcomed the help as they struggled to keep up with two major fires threatening rural highway communities, even as lightning sparked nearly a dozen more blazes.

Although firefighters are devoting most of their time and energy to a large fire in Willow, in the heart of sled dog country, and another on the Kenai Peninsula south of Anchorage, it’s important to attack the new, smaller fires quickly.

“The idea is, if we can kick things when they’re small, then they don’t get big and expensive,” Pete Buist, a state Division of Forestry spokesman, said from the Alaska Interagency Coordination Center in Fairbanks.

Fifty-three fires were burning, Buist said, “which in Alaska terms is the not the end of the world, but business is certainly picking up.”

Four water-scooping aircraft from Alberta were due in to Anchorage on Wednesday evening, he said. After clearing U.S. Customs and having their tanks steamed for invasive species, they’ll head to fires, Mowry said.

In Willow, an unincorporated community spread out along the main road connecting Anchorage and Fairbanks, 12 square miles have burned, including 25 homes and up to 20 more structures. The 335 people assigned to fight the fire were able to limit its growth on Tuesday and were in line for reinforcements Wednesday.

On the Kenai Peninsula, the blaze in a corridor between the Sterling Highway and the Kenai River, Alaska’s most popular sport-fishing venue, has consumed six structures since Monday.

The fire doubled in size Tuesday to about 4 square miles and had pushed east into the uninhabited Kenai National Wildlife Refuge. Winds shifted later and pushed it west back toward homes, Buist said.

Firefighters worked to protect structures and keep the fire from jumping the Kenai River to homes on its south side.

The fire spread to areas of heavy spruce on the north side of the river.

“Once it got into that, it was sort of creating its own wind and it developed quite a convection column,” Buist said. “Spot fires became a huge issue. Embers rise up in that convection column and then drop out ahead of the fire.”

Among the new fires started by lightning were two 2-acre fires at Montana Creek north of the Willow fire. Firefighters attacked from the air with water and retardant before they could spread to threatened cabins.

A lightning fire began at Russian Lake near Cooper Landing about 20 miles east of the Kenai Peninsula. The new fire burned 150 acres of mountain hemlock and spruce in steep terrain, and was threatening some homes along a highway.