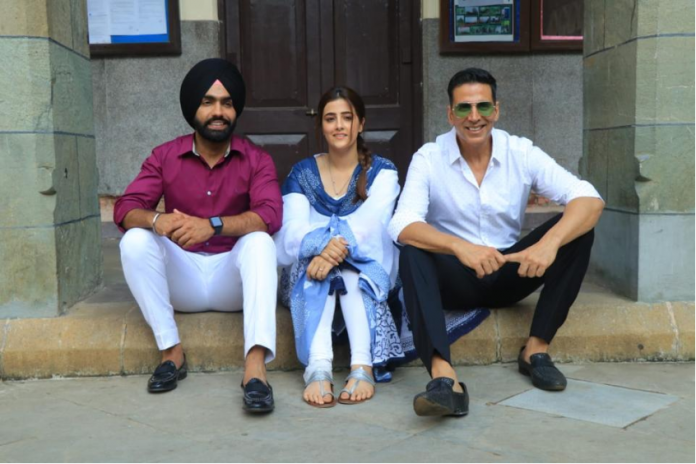 Amidst his busy schedule, megastar Akshay Kumar has managed to take time out to record a special single titled ‘Filhaal’. The song which is being sung by talented singer B Praak also marks the on screen debut of the gorgeous Nupur Sanon who is famously known as Kriti Sanon’s sister. Akshay Kumar and Nupur Sanon recently shot for the music video at Mumbai’s renowned St Xavier’s college.

The video also stars, popular Punjabi singer, Ammy Virk who will be seen sharing screen space with Akshay Kumar for the first time.

Nupur Sanon who is also prepping for her Bollywood debut, couldn’t contain her excitement of working with Akshay Kumar and took to Instagram to pen an emotional caption, ‘From being his fan to being blessed to be his co-star…what a magical feeling! Couldn’t have asked for a better start than being paired opposite my favourite @akshaykumar..sir..you’ve been so warm to me, cracked me up (even during emotional scenes) and just made me feel super comfortable with your dili wali Punjabi. Thank you for being so so amazing! Something really really special I’ve worked on..’ she said.

Akshay Kumar is currently basking in the success of the recently released Mission Mangal which has minted over Rs. 200 crores at the box office. He also has Housefull 4, Good Newwz, Prithviraj and Sooryavanshi  in the pipeline.