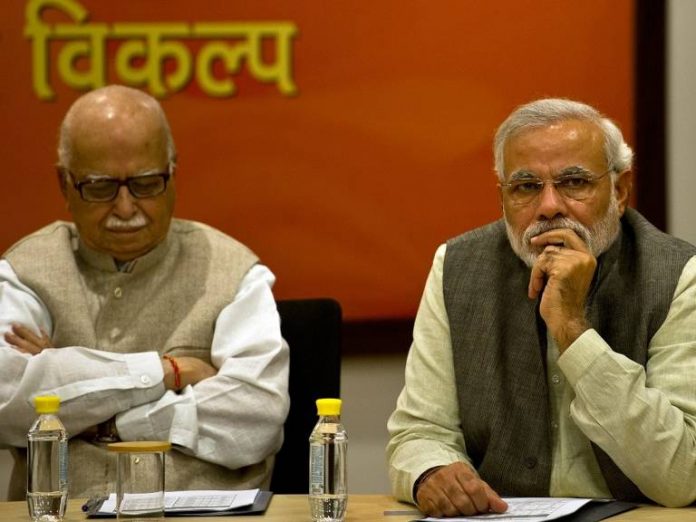 New Delhi, June 18 (IANS) Already in the line of opposition’s fire over the Lalit Modi issue, the ruling BJP on Thursday was further driven to a corner over remarks of party senior L.K. Advani that he did not rule out another Emergency-like situation in the country.

As the Congress continued its attacks on the Bharatiya Janata Party over the help provided to “fugitive” former IPL commissioner Lalit Modi by External Affairs Minister Sushma Swaraj and also allegedly Rajasthan Chief Minister Vasundara Raje, other opposition parties like AAP, the JD-U, the RJD and the CPI-M also attacked the party on Advani’s remarks, terming them a veiled swipe at Prime Minister Narendra Modi. The BJP however denied it.

In an interview to the Indian Express ahead of the 40th anniversary of the Emergency, during which he had been jailed, Advani had said that “forces that can crush democracy” (in the country) were stronger and that there were “not enough safeguards in India in 2015” to prevent an Emergency-like situation.

“Advani ji is correct in saying that Emergency can’t be ruled out. Is Delhi their first experiment,” Delhi Chief Minister Arvind Kejriwal tweeted.

Besides Kejriwal, Advani found another supporter in Bihar Chief Minister Nitish Kumar of the Janata Dal-United, who told media persons in Patna, that the BJP veteran was “right to a large extent”.

“Advani Ji proved that our concerns regarding anti-democratic elements & activities being sponsored & promoted by union government are correct.”

Congress spokesperson Tom Vadakkan said it is not only his party which is questioning the government “but even senior BJP leadership is raising questions on the efficacy of the government”, while his colleague Sanjay Jha, tweeted: “A totalitarian system is gradually overwhelming India; Advani Ji’s warnings confirm our worst apprehensions.”

Aam Aadmi Party leader Ashutosh also tweeted that Advani’s interview is first “indictment of Modi’s politics” and that Advani indicated “democracy is not safe, emergency is not far, under Modi’s leadership”.”

Slamming the NDA government at the centre over a host of issues, veteran Communist Party of India-Marxist leader Biman Bose too expressed apprehension that an emergency may be proclaimed to stifle democracy as Modi’s “aachhe din (good days)” promise had fallen flat.

“So, unable to solve all these problems, there may come a situation, when to stifle democracy, these people may resort to emergency,” he told media persons in Kolkata.

BJP spokesperson M.J. Akbar said that Advani may have been referring to institutions rather than individuals.

Internal emergency was imposed on the country by then Prime Minister Indira Gandhi on June 25-26, 1975 and lasted 19 months.

The Congress on Thursday also demanded a “decisive” reply from Prime Minister Modi on the Lalit Modi controversy while clarifying that it was not mulling any legal recourse against the government as of now.

“The silence of the prime minister is deafening. He must tell the people of India about his views,” Congress leader C.P. Joshi told the media, also asking him to clarify whether Sushma Swaraj decided to give the go-ahead for travel documents for Lalit Modi as an individual minister or on behalf of the entire government.

“He (the prime minister) should give a quick reply. He should put forward his views in a decisive manner,” he said.

The former union minister from Rajasthan also sought the resignation of Vasundhara Raje and asked the RSS to clarify its stand on her, noting it had spoken for Sushma Swaraj but was silent on the state chief minister.

“We request BJP president Amit Shah to sack her immediately,” he added.

The external affairs minister as well as the Rajasthan chief minister are facing flak for their association with former IPL chief Lalit Modi, who is wanted by the Enforcement Directorate for alleged financial impropriety in the money-spinning IPL, and currently living in London.

In Hyderabad, Minister of State for External Affairs V.K. Singh defended his senior cabinet colleague saying that matters were being blown out of proportion.

“What is happening is, many things are being blown out of proportion. Lot of noise is being made. For example, it was said that because Sushma-ji’s daughter is Lalit Modi’s lawyer, so something is fishy…. Chidambaram’s wife is a lawyer in Sardha scam. Should he come under scanner for that? I leave this question to you,” he told reporters.

Do not believe in divisive politics, Modi tells Muslim delegation