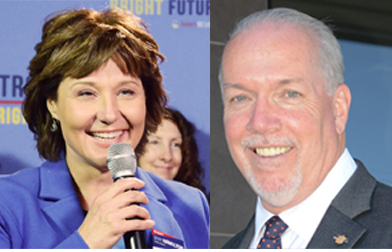 VANCOUVER: Voters across British Columbia are marking their ballots as a sometimes bruising 28-day election campaign fought on jobs, the economy and the influence of big donors in provincial politics wraps up.

Polls opened at 8 a.m. and Green party Leader Andrew Weaver was among the first in line at a middle school in his Victoria-area constituency of Oak Bay-Gordon Head.

Liberal Leader Christy Clark represents the Okanagan constituency of Kelowna West, but her itinerary showed she would vote later in the day at a community centre on Vancouver’s west side.

Due to redistribution, British Columbia now has 87 seats and 371 candidates are vying for them. Polls open until 8 p.m.

When the election was called, the Liberals had 48 seats, the New Democrats held 35, the Green party held a single seat and there was one Independent.

The B.C. Liberal party has been in power for 16 years and is attempting to build on four straight majority governments by running on the party’s record of economic growth and financial stability.

The NDP has tried to make Clark’s leadership as premier the central issue of the campaign. Horgan accused her of being out of touch with average people on issues such as the cost of housing and inadequate education funding.

Weaver’s Green pitch features a disavowal of politics as usual. He has told voters his party is the only one offering something that’s different on climate change and on preparing the province for a new economy spurred by technological change.

Negative ads and attacks between the NDP and the Liberals over political fundraising laws that place no limits on corporate and union donations have also been a prime part of the political debate.

The NDP accuses the Liberals of dragging their feet on political fundraising by failing to back bills in the legislature that would have banned donations from the corporate and labour sectors. The Liberals have shot back at donations the New Democrats received from the United Steelworkers.

In the campaign’s final days, Weaver’s supporters became a hot commodity as the New Democrats tried to persuade voters they are the only real alternative to the Liberals.

On Monday, Horgan made a final pitch to anyone who is undecided to back the NDP.

“To those voters not yet decided, join with us, come together and let’s create a better B.C.,” he said at a campaign stop in Surrey.

Horgan made a direct appeal last week for Green supporters to back the NDP. He told them they share common goals in their support for electoral reform, measures to fight climate change and opposition to the expansion of Kinder Morgan’s Trans Mountain pipeline.

Minority governments are rare in British Columbia. There have only been three in provincial history, with the last in 1952.

On the eve of the election, Weaver wouldn’t discuss where he would throw his support if no party wins a majority of seats.

“It would be irresponsible for me to undermine any negotiating potential I would have prior to people going to vote, to actually say what we would do,” he said.

“We have a platform with very clear views and ideas that we would like to get forward in a negotiation. We would try to ensure that many of the ideas are there.”

Getting “big money out of politics,” proportional representation and climate change are among the Greens’ top priorities, said Weaver, whose party has banned corporate and union donations.

Clark maintained her focus on jobs and the economy on the campaign’s last day by arguing that the other parties risk economic growth with promises that would run up the debt.

“None of the other two parties share anything in common with us,”she said. “I’m just working hard to make sure British Columbians know what I stand for, what I believe in, and the choice, the really, really stark choice in this election.”