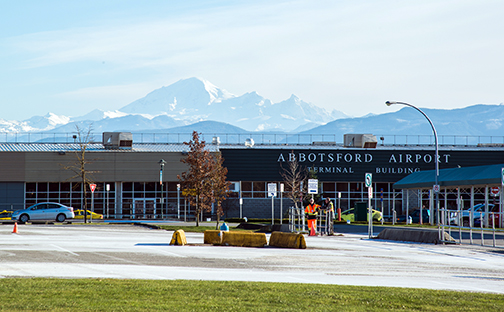 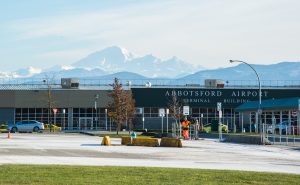 Abbotsford: Abbotsford International Airport (YXX), described as the airport in the middle of everywhere, the second largest airport in the lower mainland, and 18th busiest in Canada, has upped the ante in competitiveness by dropping its Airport Improvement Fee by 50% and eliminating fees for aircraft parking, bridge fees and baggage handling, a move applauded by WestJet.
In November, the airline announced that WestJet Encore will add another daily flight from Abbotsford to Edmonton, beginning June 15, 2015, bringing overall service to Edmonton to three flights daily. WestJet also currently offers five flights daily to Calgary.
“The leadership demonstrated by Abbotsford International Airport sets a standard we hope others will follow,” said Gregg Saretsky, WestJet President and CEO. “When airports and airlines are strategically aligned, that partnership benefits everyone involved. Airports that help us keep operational costs low also allow us to keep fares competitive and stimulate network and fleet growth. Our business is built upon growing markets or
creating new ones with low fares and a great guest experience. Airports like Abbotsford recognize they will grow if we grow, and its actions in this action demonstrate a willingness to walk the walk.”

“We were able to make these cuts as a result of a reduction in operating costs,” said Parm Sidhu, Airport Manager, “and these reductions in the fees resulted in the gain of a flight, which should take us over half a million passengers in 2015.”
As the population in the BC Lower Mainland continues to grow, the convenience factors of ground travel time, terminal access, less expensive (and adjacent) parking, quicker security screening, and even restaurant and lounge facilities on both sides of security, will play a role in increasing the passenger numbers using the Abbotsford International Airport. The facility is attractive and open, and at half a million passengers annually, still has capacity for some time to come.

On the economic side, Sidhu stressed that the success of the airport as a commercial and business hub and economic generator, was a direct result of the solid partnerships which had been built by the likes of WestJet, Cascade Aerospace a specialty aerospace and defence contractor employing around 700, the fixed base operator, Shell Aero Centre servicing general aviation, Connair, the largest forest fire fighting agency in the world, Chinook Helicopters, the premier helicopter school in North America, which is said to produce 25% of Canadian helicopter licences, Campbell and Sequoia Helicopters, Alpine Aerotech an Intrawest company, and training facilities including Cp Advance Flight, Coastal Pacific Aviation and the University of the Fraser Valley. There will be a new training facility to attract international pilot candidates as well as a number of new hangers yet to be constructed.
Of course another great economic and public relations item that showcases the airport’s services, industry and capabilities is the Abbotsford International Airshow each August. The Abbotsford International Airshow is one of the to 10 airshows in the world, which started in 1962, generally draws tens of thousands of people annually and contributes mightily to the local economy.

Whether you are a traveler, or in the aviation industry, have a close look at YXX, the airport in the middle of everything.
By Ray Hudson