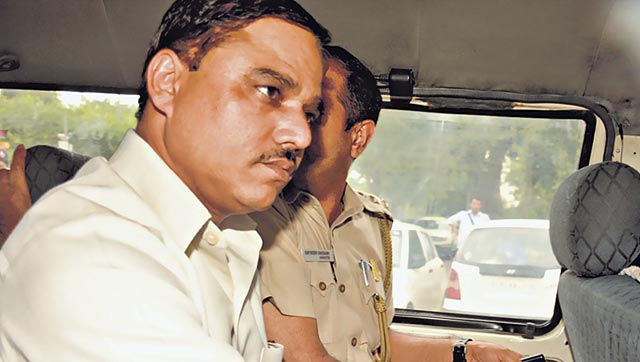 New Delhi, June 10 (IANS) A day after Jitender Singh Tomar resigned as Delhi’s law minister after being arrested over his alleged fake degree, the AAP government on Wednesday decided to induct Kapil Mishra as his successor.

Tomar, remanded to four-day’s police custody after his dramatic arrest on Tuesday was taken to Uttar Pradesh on Wednesday to probe how he secured the law degree that police say is fake.

However, the former minster challenged his arrest in a Delhi’s session court.

Tomar was accused of lying in his election affidavit that he had a law degree.

Speaking to the media in Lucknow, Tomar reiterated that he had done no wrong and was a victim of “political conspiracy”. Police said they would probe if there was a racket of forging degrees involving Tomar.

Mishra, a legislator from Karawal Nagar and presently vice chairman of the Delhi Jal Board, was named the new law minster on Wednesday.

A Kejriwal loyalist, 34-year-old Mishra holds a masters degree in social work. He is the son of Annapurna Mishra, a former BJP mayor.

Mishra told IANS that “judicial accountability, strengthening the judicial system and setting up fast track courts” would be his priorities.

“My experience of working with (former AAP leader) Prashant Bhushan would help me in my new job,” he added.

Bhushan, a senior advocate, was expelled from the Aam Aadmi Party on charges of revolting against Kejriwal, shortly after the AAP won the February assembly polls in Delhi.

It was not clear if Mishra would be given the tourism portfolio held by Tomar.

Tomar was taken to Dr Ram Manohar Lohia Avadh University in Faizabad to know how he got the degree which the university says is a fake, police said.A

A Delhi Police team brought Tomar to Lucknow first on board the AC Express. All of them boarded the Farakka Express to go to Faizabad.

Tomar was earlier scheduled to be taken to Faizabad by road but the presence of AAP activists at the Lucknow railway station forced the police to change the travel plan at the last minute.

Finding out those behind the forgery of documents was the most important aspect of the case, Bassi told the media.

“Who made them (documents)? Was it done by him (Tomar) or were these procured? Since when was the racket functioning? Who else, besides Tomar, was provided such documents?” he asked.

Meanwhile, the Bharatiya Janta Party accused another AAP legislator of giving false information about his educational qualification in the election affidavit.

“A criminal case must be registered against Surender Singh and he should be arrested immediately,” he said.

The latest trouble for the AAP comes amid power tussle between Kejriwal and Lt. Governor Jung.

This is rooted in Delhi’s unique position as a union territory functioning as the capital, with the city government having no say over several important departments and agencies that function under the Lt. Governor, who reports to the central government.