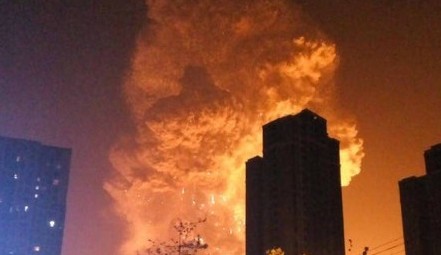 Beijing, Aug 13 (IANS) At least 50 people were killed and over 500 injured as thunderous blasts tore through a warehouse in China’s Tianjin city, triggering frightening leaping flames. The explosions — like an earthquake — gutted over 2,500 cars and caused widespread destruction.

Twelve fire-fighters were among those killed in the horror in Tianjin, over 100 km from here. A total of 521 people were hospitalized, including 71 who were in critical condition. Over 20 people were missing, Xinhua news agency reported.

Residents of Tianjin — home to 14.72 million people — said the blasts were like a “big fireball” and they felt like a “bomb that just exploded”, forcing them to flee to the streets, terrified. Many were wounded.

More than 1,000 fire fighters and 151 fire engines battled the blaze. Drones were dispatched to the site, said officials.

Zhang, who lives a 10-minute-drive from the site, said the blasts turned the night sky seem like day, reported China Daily.

A video clip showed thick smoke covering the sky, and shortly after fires raged. There were several loud bangs.

The explosions were so massive that they triggered seismic activity.

Authorities said fire fighters first arrived at the Tianjin Port on Wednesday night following a report that several containers were on fire.

Zhou Tian, head of Tianjin’s fire department, said the second batch of fire fighters reached after a gap of 10 minutes — and roughly 14 minutes before the first explosion.

That occurred at about 11.30 p.m. followed by a more powerful blast, and a series of smaller explosions, BBC reported, adding the blasts caused a massive fireball.

The warehouse contained “dangerous” goods and their volatility made the fire “unpredictable and dangerous to approach”, said the rescuers.

Du Wenjun said he never imagined he would see a “mushroom cloud” outside the window of his home.

Zhao Lirong, a 35-year-old businesswoman, was asleep when the blast blew off the windows and doors of her apartment, hitting her head, her son’s neck and her husband’s feet.

Blood stains were splattered on the floors of hospitals that received injured patients.

People rushed onto the streets in their pyjamas and frantically made calls to find the well-being of their loved ones.

Most patients suffered burns, bruises, bone fractures and injuries related to the shockwave.

“It’s all black and smog, I can’t see anything inside. Some of my colleagues had even worse injuries,” an injured fire fighter told Xinhua.

Smog billowed from the site. In a nearby apartment complex, the balconies of many apartment buildings were shattered.

The military also organised 130 men to assist with the rescue operation, including the use of drones and piloting helicopters to observe the site and drop water on the flames.

Xi ordered authorities to spare no effort to treat the injured, search for the missing and contain the fire.