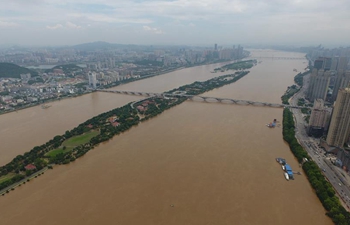 Beijing: A total of 47 people were dead and 22 missing as floods wreaked havoc in central China’s Hunan Province and Guangxi Zhuang Autonomous Region in the south.

The ensuing floods have forced the evacuation of more than 1.2 million people. More than 38,000 homes have collapsed and nearly 880,000 hectares of crops have been damaged.

The water levels in Dongting Lake and several major rivers have risen above the warning levels.

About 15,000 people have been sent to the front line and over 160 million yuan ($23.5 million) has been allocated to disaster relief in Hunan.

Rain is forecast to weaken in Hunan in the next few days but heavy rain is expected in some areas.

In Guangxi, rain has killed 20 people and left 14 missing. Around 20,000 houses are either collapsed or damaged.

The disaster has inflicted direct economic losses of nearly 4.6 billion yuan. Authorities have allocated 10 million yuan to the affected areas.