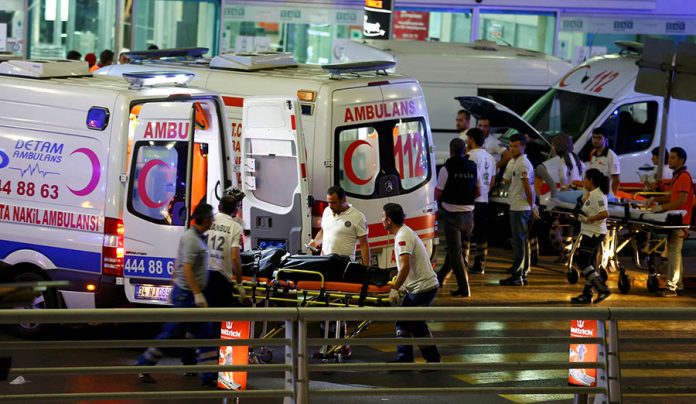 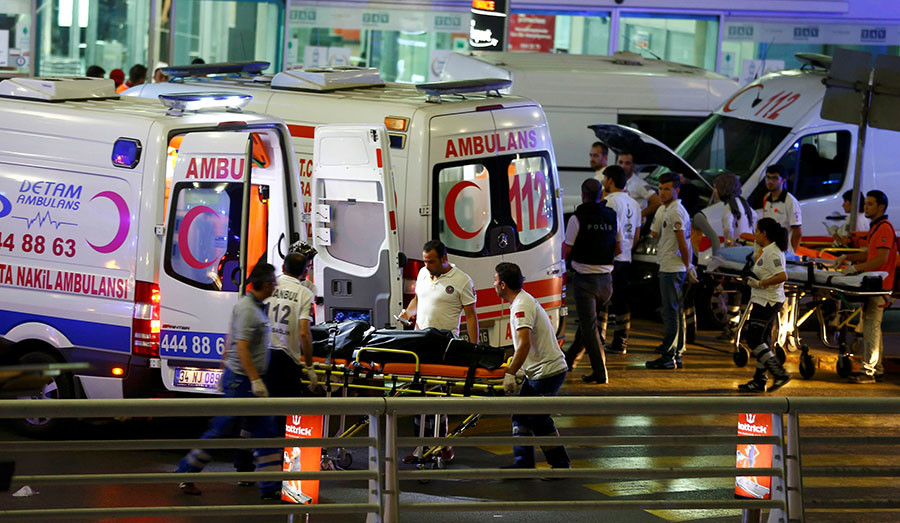 Istanbul: At least 41 people, overwhelmingly Turks, were killed and nearly 150 injured as three terrorists opened fire at the international airport here before blowing themselves up among crowds of passengers, Turkish authorities said.

The gun and bomb attack at the Ataturk International Airport, the third busiest in Europe after London Heathrow and Paris Charles de Gaulle, took place on Tuesday night, leaving behind a bloody carnage for which Turkey blamed the Islamic State.

“The terrorists came to the airport in a taxi and then carried out their attacks,” Prime Minister Binali Yildirin said.

“The fact that they were carrying guns added to the toll. Preliminary findings suggest all three attackers first opened fire and then detonated themselves.”

Yildirin said all signs indicated that the Islamic State was responsible for the bloodbath.

The dead included at least six foreigners — four Saudis and one Iranian and Ukranian each. The nationality of the three terrorists was not known.

A video from inside the terminal showed people fleeing and a bright orange flash of fire from one of the explosions. Many victims staggered and some collapsed on the floor.

Another video showed a man — one of the terrorists — walking with a gun, which he drops when he was apparently shot by a security officer.

He slumps to the ground and the officer briefly stands over him before running. About 10 seconds later, there is a massive explosion.

In no time, bodies sprawled at the terminal were covered in sheets, with glass and abandoned luggage littering the building, CNN reported. Panic gripped the airport.

Media reports quoted Laurence Cameron, a passenger, describing what he saw after he got off a plane.

“It was just a massive crowd of screaming people. Some were falling over themselves,” he said.

He said the attack happened in the airport area where one normally hails a taxi. “The ground is just kind of shredded. There are bloodstains on the floor as well.”

Taxis were used to rush casualties to hospitals, BBC reported. Desperate relatives of those missing later gathered outside a hospital where several victims had been taken.

“I condemn it strongly,” he said. “My thoughts are with bereaved families. May the injured recover quickly.”

Swift messages of condemnation followed from all across the world including the US, Britain, France, Belgium, where terrorists attacked the Brussels airport in March, Pakistan and Afghanistan.

The Istanbul airport was closed for several hours and flights into the airport were diverted to capital Ankara and other cities. It reopened at around 2 a.m.

“Make no mistake: For terrorist organisations, there is no difference between Istanbul and London, Ankara and Berlin, Izmir and Chicago or Antalya and Rome,” he said.

“Unless all governments and the entire mankind join forces in the fight against terrorism, much worse things than what we fear to imagine today will come true.”

Gun and bomb attacks over the past two years in Turkey have been blamed on both the Islamic State militants and Kurdish separatists such as the Kurdistan Freedom Falcons.