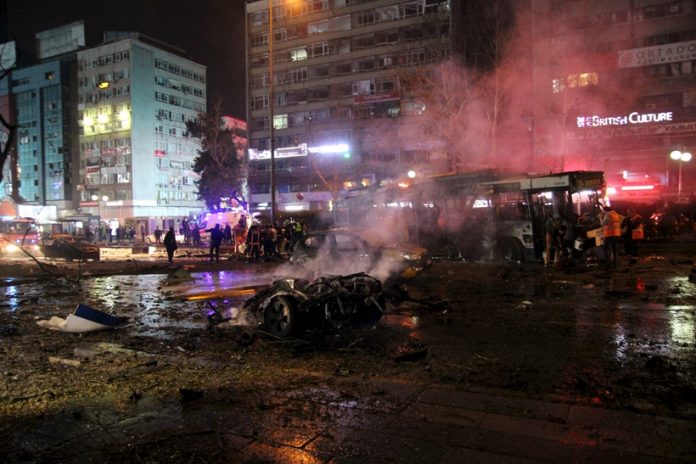 Ankara, March 14 (IANS) At least 37 people were killed and 125 injured in an explosion that hit Turkey’s capital city of Ankara, the media reported on Monday.

The toll was expected to increase as at least nine of those injured were in critical conditions, Health Minister Mehmet Muezzinoglu said on Monday.

A suspected bomber, who also died in the blast, was a female member of the outlawed Kurdistan Workers Party (PKK), security sources said.

The arrests were made during operations in Eskisehir and Sanliurfa provinces, the official said.

Documents related to “illegal organisations” were seized during the raids, he added.

President Recep Tayyip Erdogan condemning the attack said that “Turkey has become a target of terror attacks due to the instabilities in the region.”

While Turkey’s Supreme Court Head Ismail Rustu Cirit has said that the country must learn “to live with terror”.

“Unfortunately, our country has to live with this terror but the perpetrators, those who wish to attain their goals through terror, should know they will never reach their aim,” the head said.

According to sources, Prime Minister Ahmet Davutoglu has postponed a visit to Jordan following the bombing.

So far, no group has claimed responsibility of the attack, but government sources have cast suspicion on the PKK.

A curfew was declared in three towns in south-east Turkey, while warplanes struck PKK camps in Iraqi Kurdistan.

Eleven warplanes carried out air strikes on 18 targets including ammunition dumps and shelters in the Qandil and Gara sectors, the army said.