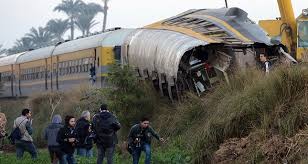 Cairo: At least 36 people were killed and more than 123 others were injured on Friday in a crash between two trains in Egypt’s Alexandria province, Egypt’s Health Ministry said.

The ministry has announced state of emergency in all hospitals in Alexandria and neighbouring Beheira province, Xinhua reported.

Some 75 ambulances have been transferring the victims to hospitals, said the ministry in a statement.

It added that the number of casualties may rise due to the seriousness of many injuries.

The Alexandria-bound train coming from Cairo crashed into the rear of another train on its way from Port Said Mediterranean city to Alexandria.

The accident took place in Kourshid area, east of the coastal city of Alexandria.

Egypt’s general prosecutor has ordered an urgent investigation into the accident.

Egypt has witnessed a number of deadly train accidents in which hundreds were killed and injured.

In 2013, at least 19 were killed in a train derailment in Giza governorate, while a 2012 collision between a train and a school bus in Upper Egypt killed 51 people, mostly children.