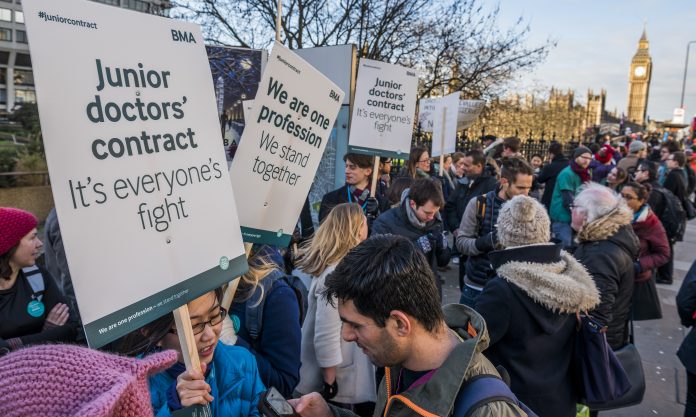 London: Almost 3,000 operations were cancelled on Wednesday as second wave of industrial action by thousands of junior doctors started on Wednesday after negotiations over pay and new contracts failed.

The second 24-hour strike by doctors started at 8.00 a.m. (local time). Though the emergency care was still being provided, Xinhua reported.

The British government wanted to put the National Health Service (NHS) on a seven-day working basis and tried to introduce a new contract for junior doctors who were concerned about whether they could premium payments for work on Saturdays.

The British Medical Association (BMA), the trade union for 170,000 doctors in Britain, proposed accepting half of the 11 percent basic pay raise offered by the government in return for retaining extra payments for working Saturdays. However, Health Secretary Jeremy Hunt reportedly rejected the proposed deal.

Junior doctors joined the walkouts on Wednesday in many cities around the country, including London, Sheffield, Manchester.

“Last weekend, thousands of us took to the streets of London and Bristol to show that our fight for a properly negotiated contract continues. (Today) we raise our voices again, on hundreds of picket lines across England,” said Johann Malawana, BMA junior doctors committee chair, in a message to junior doctors ahead of the industrial action.

Chris Hopson, chief executive of NHS Providers, said: “Our members are saying to us ‘this really does need to reach a conclusion.’ The ideal conclusion would be for employers to make a fair and final reasonable offer and for the BMA to accept it.”

The tragedy of farmers in once prosperous Punjab