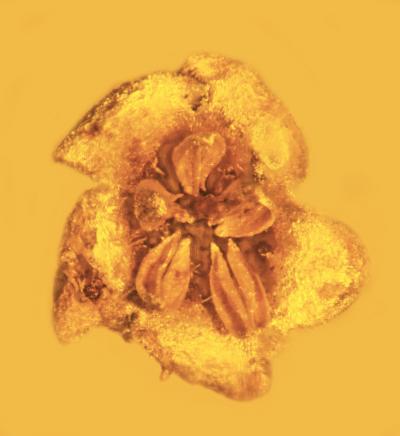 New York, Feb 17 (IANS) Researchers have discovered the first ever fossil specimens of an “asterid” — a family of flowering plants that gave us everything from the potato to tomatoes, tobacco, petunias and our morning cup of coffee.

The 20-30 million-year-old fossil flowers were found perfectly preserved in a piece of amber from prehistoric jungles of what is now the Dominican Republic.

These flowers, however, came from the dark side of the asterid family – they belong to the genus Strychnos, which ultimately gave rise to some of the world’s most famous poisons, including strychnine and curare.

Poisons that would later find their way into blow-gun weapons, rat control, Sherlock Holmes stories and the movie “Psycho” appear to have had some of their ancestral and biological roots in these flowers, the researchers said.

“The specimens are beautiful, perfectly preserved fossil flowers, which at one point in time were borne by plants that lived in a steamy tropical forest with both large and small trees, climbing vines, palms, grasses and other vegetation,” said George Poinar, Jr, professor at Oregon State University in the US.

“Specimens such as this are what give us insights into the ecology of ecosystems in the distant past,” Poinar said.

“It shows that the asterids, which later gave humans all types of foods and other products, were already evolving many millions of years ago,” Poinar noted.

Asterids, the researchers noted in this study, are among Earth’s most important and diverse plants, with 10 orders, 98 families and about 80,000 species.

The findings were detailed in the journal Nature Plants.