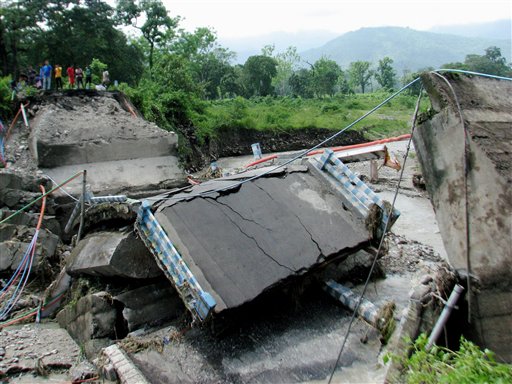 Siliguri/Kolkata, July 1 (IANS) A string of landslides triggered by heavy overnight rain killed at least 30 people, while nine others were reported missing in the Darjeeling hills of West Bengal, Chief Minister Mamata Banerjee said on Wednesday.

While Banerjee rushed to the region and announced a compensation of Rs.4 lakh for the victims, Prime Minister Narendra Modi deputed Minister of State for Home Affairs Kiren Rijiju to take stock of the situation.

Condoling the deaths, Modi announced a compensation of Rs.2 lakh from the national relief fund to families of the deceased.

Home Minister Rajnath Singh spoke to Mamata Banerjee and assured of all possible assistance from the central government.

The landslides have taken a severe toll on national highways 31 and 10, snapping the road link with Sikkim. Telecom and electricity services were badly affected, with many tourists getting stranded.

Banerjee, who canceled her scheduled visit to Birbhum district, rushed to the region assuring all assistance to the affected people.

“So far 30 people have died and eight people are missing in the landslide,” said the chief minister.

Banerjee said that of the 30 bodies recovered, 22 were from Mirik, six from Kalimpong and one each from Sukhiapokhri and Gorubathan areas of Darjeeling district.

While the Centre rushed two teams of the National Disaster Response Force (NDRF), personnel of the Sashastra Seema Bal (SSB) were engaged in relief and rescue operations. The relief operations though were hampered by the hilly terrain and darkness.

The state government has also sought the Indian Army’s assistance in the rescue and relief operations.

“Nine people still missing. Rescue operations will resume early on Thursday morning,” said Banerjee, who also announced Rs.1.25 for each of the injured.

According the district administration, over 20 people were hospitalised with various injuries.

The toll is likely to go up with many people feared trapped beneath the debris.

Banerjee said 27 of the bodies were handed over to their families for last rites, while the rest will be done on Thursday.

“The administration is working round the clock to complete all procedures to hand over bodies of the victims to their families for their last rites, for which assistance is being provided by the local administration,” she said.

According to the SSB, the string of landslides which wreaked havoc in Darjeeling, Kalimpong and Kurseong sub-divisions began in the early hours of Wednesday.

In Jalpaiguri district, at least 5,000 people were affected by water-logging and their misery was compounded by the release of over 5,000 cusecs of water from the Teesta barrage.

“Vast areas in Jalpaiguri have been inundated due to sudden rise in the water levels in all major rivers. More than 2,000 people have been rescued and taken to safe places,” the chief minister said.

The Jalpaiguri district administration has issued a red alert as the Teesta and Torsa rivers touched danger levels.

The Gorkha Janmukti Morcha (GJM)-administered Gorkhaland Territorial Administration (GTA) too announced monetary compensation of Rs.2 lakh each to the families of the deceased and Rs.50,000 for the seriously injured.

“The GTA is working round the clock to coordinate efforts and provide best assistance to all landslide survivors and those who have lost their houses. I would personally write to the government for immediate funds for relief work and a team to visit the hills,” GTA chairperson Bimal Gurung said.