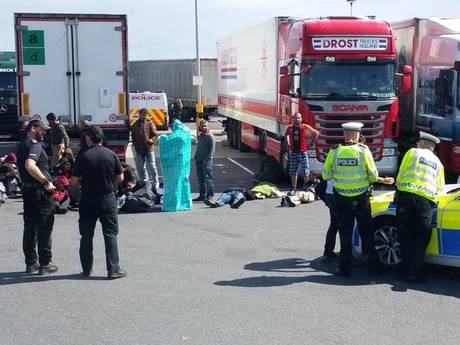 Surrey (UK), Aug 29 (IANS) A driver of a heavy goods vehicle and 27 people were arrested on suspicion of illegal entry into Britain, police said on Friday.

Surrey Police’s Roads Policing Unit and Surrey police arrested the driver of the vehicle and 27 suspected illegal immigrants at 10:50 a.m. on Friday morning, after they were found in the vehicle at a motorway service station in Surrey, southeast England, Xinhua reported.

Medical staff were sent to the scene to assess the health of the passengers and no serious health conditions were reported.

Members of the public called the police after hearing noises coming from the lorry when it was parked at the service station, media said.

So far, there’s no detail about how long the suspected illegal immigrants had been inside the vehicle and how they were smuggled into Britain.

Surrey police said they have handed the case to Britain’s visas and immigration service.