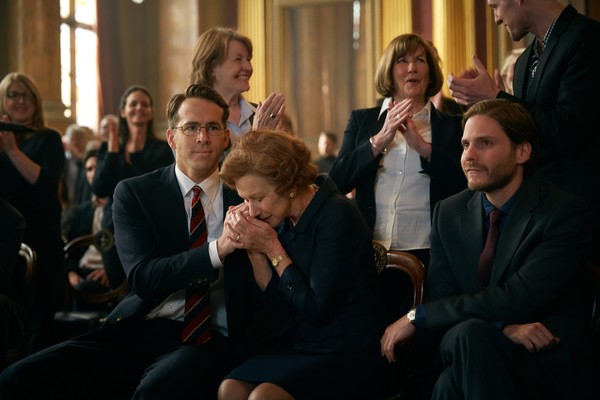 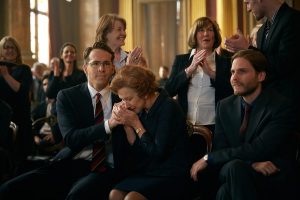 Sizzling performances steeped in historical context make Woman in Gold engaging entertainment. Based on true events this harrowing story from EOne Entertainment reveals out some deep dark secrets. Check out this tour de force at The Fifth Avenue Cinemas.
Locals and folks knowledgeable on Vancouver history will notice some startling connections. Elements of World War 2 continue to haunt an elderly woman now residing in modern Los Angeles. Life was good in the 1930s for Maria Altmann before the Nazis came a calling. Dame Helen Mirren (The Queen) plays this gutsy little old lady with considerable zest. Back in the day this much younger girl was born into privilege in her native Austria as a Blockbauer. Connection #1 to Vancouver relates to a member of this successful Jewish family fleeing to British Columbia, changing their names to Bentley, and becoming even more wealthy as lumber barons.
Flash forward to modern times where Mrs. Altmann decides it’s time to recover the treasures housed in her family home that were long looted by the Nazis. Rookie lawyer Randol Schoenberg reluctantly agrees to take up the cause and the pair embark on a thankless task to get justice after all these years. Vancouver connection #2 sees homeboy Ryan Reynolds don the legal robes and try to go up against the present day Austrian government.
At the heart of this tale is a stolen painting known as the woman in gold. Going up against the system is never easy and first time director Simon Curtis delivers a noble effort In This gutsy look at one determined little old lady who must relive the past to do what’s right. Never again.