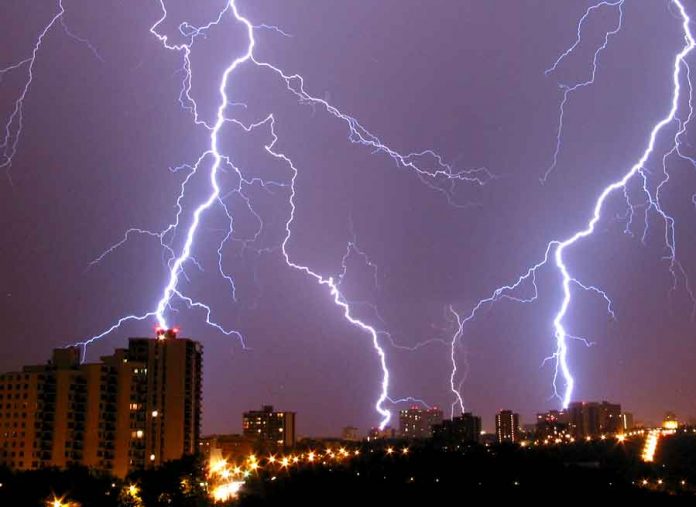 Hyderabad, Sep 6 (IANS) At least 20 people were killed due to lightning in different parts of Andhra Pradesh on Sunday as heavy rains lashed the state under the impact of a low pressure area over Bay of Bengal.

While six people died in Nellore district, four each died in Krsihna and Prakasam districts. Three deaths were reported from Guntur, two from East Godavari and one each from Anantapur and Srikakulam districts.

The victims in Nellore districts include a father and his son. Household electronic goods in a building in temple town of Tirupati were damaged due to lightning.

The state government has announced Rs.4 lakh ex-gratia each for the families of those killed due to lightning. The decision was taken at a meeting of top officials convened by Chief Minister N. Chandrababu Naidu in the evening in Vijayawada to review the situation in the wake of heavy rains.

Naidu held a tele-conference with the district collectors. He asked them to be on alert and take all precautionary measures in the view of the forecast of heavy rains over next 24 hours.

Women cricket teams of Andhra Pradesh and Tripura had a narrow escape when lightning struck during a match at Perecharla in Guntur district. A palm tree outside the Andhra Cricket Association cricket ground caught fire.

Naidu spoke to officials and gathered information about the incident.

Parts of Andhra Pradesh and Telangana received heavy rains under the impact of the low pressure, leading to flooding of low-lying areas and inundated roads, affecting the movement of traffic.

Hyderabad also experienced heavy rains. The vehicular traffic was thrown out of gear as roads in several busy areas were inundated.

People saved six people from a car which was caught in swirling waters in Champapet area in Hyderabad. Locals used a tractor to prevent the car from being washed away. Some parked vehicles including cars were almost submerged in the rain water at few places in the city.

The met office has forecast more rains in both the Telugu states over next two to three days.