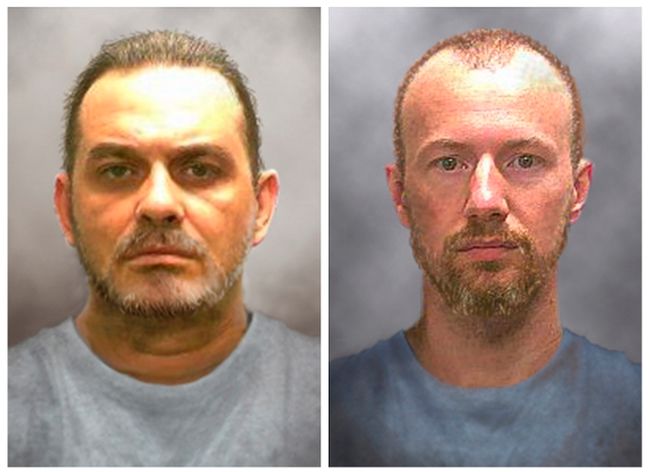 By Bonny Ghosh, THE ASSOCIATED PRESS

PLATTSBURGH, New York: The two convicted murderers who escaped from a New York prison three weeks ago may be headed toward Canada, state police said Friday, and they likely are armed.

“We have a high degree of confidence in our conclusions,” state police Maj. Charles Guess told reporters, saying that searchers were investigating both a camp and a “field site” in a vast forested region of hunting cabins and summer camps not far from the border.

“We have no reason to believe they’re in Canada yet,” Guess said. He said authorities were evaluating evidence that he declined to describe.

More than 1,100 searchers still have not recorded a credible sighting of the two men, though a reported sighting of a man running from a hunting cabin on Saturday morning led to DNA evidence that intensified the manhunt in the remote region.

Guess said the two escaped prisoners were primarily moving at night and had taken some “items that might assist them.” Many of the hundreds of cabins and camps are still empty just before the summer season when schools let out and vacationers arrive, and many are stocked with supplies like non-perishable food and even weapons.

Richard Matt and David Sweat escaped the Clinton Correctional Facility on June 6 after cutting through the walls of their adjoining cells, climbing down a catwalk and navigating a steam pipe before emerging from a manhole within sight of the prison.

Two prison employees have been arrested and accused of helping them. Prison guard Gene Palmer has been suspended without pay, state prison officials said Friday. He was arrested Wednesday on charges of promoting prison contraband, tampering with evidence and official misconduct.

Palmer has told investigators he provided paint, tools and access to a prison catwalk for Matt and Sweat. A week before the escape, Palmer delivered to Matt a chunk of frozen ground beef that authorities say had hacksaw blades, a screwdriver and other tools hidden inside. But he says he had no idea the two men were planning to escape.

In return, Palmer has said he accepted “elaborate paintings and information on the illegal acts that inmates were committing within the facility.” The prison guard is free on $25,000 bail.

Prison tailor shop instructor Joyce Mitchell also has been charged with helping the two men escape and has been accused of passing the frozen meat with hidden tools to Palmer.

Sweat, 35, was serving a life sentence without parole in the killing of a sheriff’s deputy. Matt, 49, was doing 25 years to life in the kidnapping, torture and hacksaw dismemberment of his former boss.