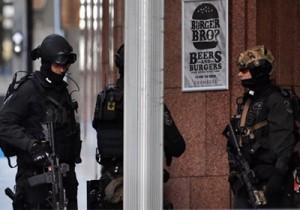 Paris, July 13 (IANS) Police on Monday rescued 18 people from a shopping centre north of Paris where armed assailants were holding at least 10 others hostage in a clothing store, media reports said.

Those rescued were hiding in a canteen in the Qwartz centre in Villeneuve-la-Garenne, near Paris, a police source said adding that the hostage drama appeared to be an attempted armed robbery and not a terrorist attack.

“Two or three armed criminals went into the Primark store for what we think was initially an attempt at armed robbery,” BBC quoted a police source as saying.

Traffic in the area was stopped and all other shops nearby were closed.

A police source said two or three gunmen entered the store around 6:30 a.m. for an attempted robbery.

An employee of the shop “sent a text message around 7:00 a.m. to her boyfriend saying that they were held hostage by two gunmen”, the source added.

“Le Parisien” daily said three men were involved, adding that one may have been recognised as a Primark employee.

October’s no growth GDP may spur Bank of Canada to cut...