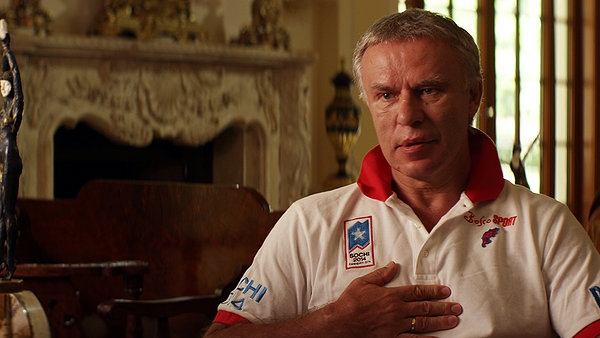 Hockey is Canada’s national game. Sorry lacrosse. Over the years other countries have tried to take away our birthright as the best in puck control. Learn the true meaning of hockey skills and supremacy by way of Red Army. Compelling on both a sports and political level this must see film from Sony Pictures Classics now is telling it like it is aT the Fifth Avenue Cinemas. Much has been made of the “influence” of foreign players on the NHL.Chief cheerleader with his anti Russian rants was (and still likely is) Don Cherry. Not even this once wildly fabled popular commentator’s big mouth is able to throw water on the truths revealed in Red Army, A vibrant
documentary.
Front and centre in this telling tale of how the Russians built a hockey
dynasty In The 70s and 80s is Slava Fetisov. Up close and personal director/writer Gabe Polsky gets as we see how the Russians used their political power and military might to put together a team of proficient players with one thing in mind: win for Mother Russia.
As captain Fetisov recounts the successes of those old championship teams and the “merciless” ways the coaches and government treated the chosen few on ice talent. Harsh treatment and conditions can’t take way from the tremendous play the young men achieved, leaving NHL players and teams destroyed in the wake, Superb highlights of conflicts on ice with tremendous vintage footage of how the Russians trained to win hockey bouts on the North American and international levels make Red Army truly must see entertainment, whether you are into sports. Politics, history or just having a grand great time at the movies.